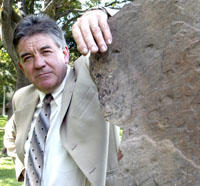 Whether it is for a rock concert or to hold debates, there is a new gathering place for students on campus. The Megalith rock formation in front of the Bailey Building is designed to draw together students and faculty and serve as a circle of knowledge, said Nowell Donovan, provost and vice chancellor for academic affairs .

“A university is after knowledge and so are people,” Donovan said. “It’s a great catalyst for creativity and is designed to be a circle of truth.”

The rock formation is a replica of an existing formation in the British Isles. The project was funded by Donovan and cost a couple thousand dollars, he said. It will be used to give students an alternative learning space and expand TCU’s global presence, Donovan said.

Kay Stevens, associate professor in the School of Education, said, “A lot of people are thinking, what the heck are these rocks?”

But, she said it is a great art addition to the campus.

Under the right weather and bug conditions, Stevens said she would consider holding class inside the rock formation.

The Megalith’s location is no coincidence either, Donovan said. He wanted to keep it out of the way so that it would not interrupt the frisbee throwing that takes place on the lawn.

“I would love for the fine arts department to perform plays in the Megalith or for the political science department to host debates inside,” Donovan said. “It would also be great space to hold a ‘rock concert.'”

Junior Tricia Tedford, a member of TCU’s percussion band, said she thought it would be “cool” to have concerts in the rock formation and it may draw more people to attend if it was outside.

The people that constructed these formations in the British Isles used them to track the behavior of the moon.

The Recumbent, or center, stone is in the exact spot the moon sets, Donovan said .

There are eight stones that form the circle along with three outlier stones. Each outlier stone is named according to its position around the circle, Donovan said.

The Megalith is almost complete except for carvings and other engravings that need to be made on the rocks, Donovan said.

The stones, which were brought in from Oklahoma, will be engraved with “cup and ring” marks by Chris Powers of TCU’s fine arts department, Donovan said.

Although there are no plans for future Megalith formations on campus, Stevens said she hopes this formation opens the gates for other cultural art work on campus.

“This stone formation is a good example to make everyone aware of cultural art and the difference in symbols,” Stevens said. “The students and faculty should be ambassadors for explaining the meaning of the stones to those in the community.