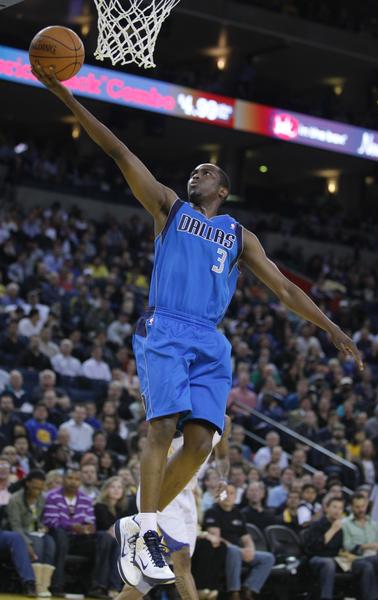 After suffering a fractured left foot which kept him inactive for 38 games, all eyes have been on Dallas guard Rodrigue Beaubois since his return to the hardwood Feb. 16.

The 6-foot-2 guard finished with a solid 14 points and six assists in a 127-109 home rout against New York March 10 and tallied 15 points and four assists in a 101-73 rout of Golden State Sunday. Beaubois has averaged 19.5 minutes per game in 16 games this season, but head coach Rick Carlisle is looking to extend minutes for Beaubois.

“He is showing great progress and is playing to exhaustion,” Carlisle said. “I’m looking to get him in more. To maintain the physical level he does is substantial. I’m very pleased with his progress. I want to keep developing him and extend his minutes.”

The second-year pro tallied 13 points, six assists and three steals in his season debut against Sacramento. He also had 15 points and two steals all in the first half in a home loss to Memphis March 6.

Dallas guard Jason Terry said Beaubois is making plays each time he is on the hardwood.

“He’s been solid,” Terry said. “His conditioning has been a little behind, but we’re going to continue to push him in practice and push him on our off days. He’s quick as ever, you know he can make plays and he’s scoring great in the minutes that he’s given.”

While the Guadeloupe native has had eight games in double-digit scoring range going into last night’s game against the Minnesota Timberwolves, there seems to be a statistical discrepancy in Beaubois’ effectiveness against quality playoff competition. “Roddy-B” managed only two points on 1-7 shooting in a March 12 96-91 loss to the Los Angeles Lakers. Against the Western Conference leading San Antonio Spurs, Beaubois managed just eight points on 4-11 shooting in a 97-91 loss to the Spurs March 18.

Beaubois, however, has started 15 of the 16 games he has played before last night, averaging 10.3 points per game as he tries to get in to midseason playing shape just as the playoffs loom on the horizon. Mavs’ owner Mark Cuban said he sees Beaubois as a potential individual scoring threat on any given night. Beaubois exploded for a career-high 40 points and drained a career-high nine 3-pointers nearly a year ago today against Golden State.

“He’s playing great and does a great job off the dribble,” Cuban said.

Selected in 2009 as the 25th overall draft pick by the Oklahoma City Thunder, Dallas quickly acquired Beaubois in a trade. The French guard was discovered at an open basketball camp in Guadeloupe by NBA player Mickael Pietrus.

Mavs center Tyson Chandler, who made his return this week after recovering from a sprained right ankle, said Beaubois has been exciting.

“He’s been great for us,” Chandler said. “He is the energy and youth that we need. He definitely brings more excitement to the team. I feel the longer and better condition he is in, the greater he is going to be for us.”