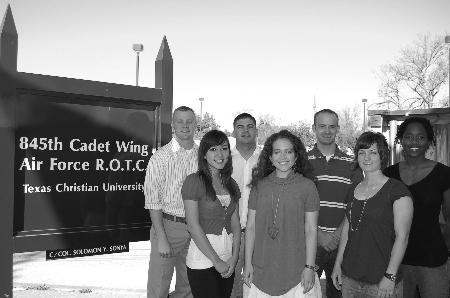 I, Name Here, having been appointed to the rank of 2nd Lt. in the United States Air Force, do solemnly swear …

Word for word, nine TCU cadets of aerospace studies, Air Force ROTC, will recite the oath of office, binding words that tie them to their new career. Three pieces of rank, gold bars, one bar on each shoulder and one to their hat, will be pinned by family or friends recognizing their accomplishments over the last four years.

The commissioning ceremony, similar to graduation, represents the cadet’s transition from cadet to officer.

Lt. Col. Golda T. Eldridge Jr. said their commitment to serve their country separates them from the majority of students.

The different branches of the Air Force to which the nine students were assigned will scatter them across the world.

One of the nine graduates, Alicia Davis, an entrepreneurial management major, will travel to Incirlik Air Force Base in Turkey as a contracting officer.

Besides improving her time management skills, Davis said, she is no longer shy because of the many ROTC classes that emphasize leadership.

“I wasn’t born a leader, but Air Force has helped me become a leader,” Davis said.

“Other students in their extracurricular activities, whether it is Greek activities [or] those kinds of things, will get similar chances, but here it is an institutional part of the program,” he said.

Kidron Vestal, an advertising/public relations major, said the program demands and inspires them to always perform their best, from the creases in their uniform to their execution of exercises.

She said her job will require her to be at her best because within the public affairs branch, she will be the face of the Air Force.

There is a high likelihood for them to be deployed to places such as Iraq or Afghanistan, he said.

“They understand that it is a possibility and they have accepted that,” he said.

Emily Chilson, an advertising/public relations major, said she is appreciative of her future at Shaw Air Force Base in South Carolina after watching civilian peers “freak out” about internships, interviews and jobs.

“It’s been a four year interview process,” she said, “I will be graduating and have a career.”