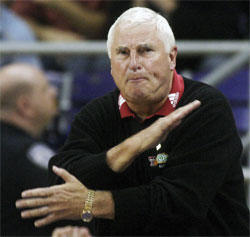 A 20-6 run to start the second half was not enough to keep the Horned Frogs from receiving their second loss of the season Wednesday night at the hand of the Texas Tech Red Raiders. Trailing 38-24 at halftime, the Frogs tied the game at 44, capping off 20-6 run.

However, Texas Tech’s three point shooting proved to be too much in the end.

“Burgess was a dagger every time he stepped up for a three,” head coach Neil Dougherty said.

The Horned Frogs missed some wide open shots and had difficulty keeping their patience, Dougherty said.

“We missed some opportunities in the first half, and, when that happens to a young team, it makes them press a little too much,” Dougherty said.

Coming out in the second half, the Frogs were able to calm down and play their game, Dougherty said.

“We came out and we played really solid defense in the second half,” Dougherty said. “We had some good defensive stands and offensively we all of a sudden started playing more relaxed and much more calm.”

“[Sophomore power forward Kevin] Langford and [junior power forward Alvardo] Parker are playing very well together, and that is going to be very good for us,” Dougherty said.

Langford said he agreed the inside play was good along with the team’s determination.

“Our intensity was very strong, along with our fight and communication, and the way we fought back definitely shows that we are not going to give up,” Langford said.

A crowd of 5,438 came to see the Frogs in action tonight, and, despite Dougherty’s concerns, his players did well in this charged environment.

Langford also said that playing in this atmosphere was exciting and gave the Frogs a lift.

“The crowd really gave us a good push, and it was great to have people there and cheering for us,” Langford said.

Dougherty said this milestone just makes sense and is a great accomplishment for an outstanding coach.

“I have always been a big admirer of coach Knight,” Dougherty said. “When you have coach Knight about to overcome coach Smith, and then the heir apparent to that will most defintely be coach K, I think that the state of our game as college basketball coaches is in very correct order.