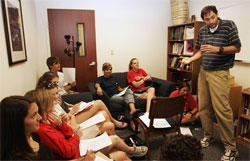 The largest ministry on campus is saying goodbye to its beloved minister as he prepares to move to a different university to be closer to his family.Dustin Salter brought Reformed University Fellowship to TCU and is now moving to Furman University in Greenville, S.C. so he and his wife can be closer to their parents.

Salter was a self-proclaimed “military brat” growing up. He lived in Alaska, Georgia and Germany before attending college in Tuscaloosa, Ala. He graduated from the University of West Alabama in 1992.

Though he did not grow up in a spiritual home, Salter became a Christian at 16 when a friend took him to church. He felt called to vocational ministry after college under the guidance of friends in his church.

Salter also credits reading “Preachers and Preaching” by Martin Lloyd-Jones, for his decision to go into ministry. After college, he attended the Reformed Theological Seminary in Orlando, Fla.

Through a connection with a friend, Salter was recruited to become an RUF minister. He was given the option to go to Texas A&M University or TCU and he let the national organization of RUF choose TCU for him.

Salter arrived at TCU seven years ago and said he felt that TCU’s campus was spiritually “dry” compared to other Texas universities. Though Campus Crusade for Christ was the largest ministry on campus at the time, Salter was excited to put RUF’s motto to work.

“(RUF’s mission) is reaching students for Christ and equipping them to serve his church,” Salter said. “We meet as a large group Tuesday nights to worship and study Scripture.”

The very first year, the “large group” averaged about 12 students each meeting. Now, there is an average of about 200 students involved with RUF.

Salter’s job consists of teaching, leading and maintaining fellowship with students. His job allows him to interact with students in various places, including his office, local coffee shops and basketball courts, where he can be found shooting hoops with students.

Salter said he has become more willing to trust God with his life and has had to memorize more Scripture due to his position as campus minister.

Salter’s position has affected more than his personal life.

Brett Taylor, a member of RUF’s leadership team who works closely with Salter, said Salter has affected the lives of his students.

Taylor, who leads the music portion of the large group and attends leadership meetings, said he and Salter have a mentor relationship where they eat together and play basketball regularly.

“Dustin is like a father-figure to me at school,” said the junior management major. “He’s my best friend. He’s also the father and founder of RUF.”

Through their relationship, Taylor has been strengthened in his theology. He said Salter has helped him to know and understand what he believes and why.

Salter makes a great RUF minister because he has a heart for people and for sinners, Taylor said.

“His life is a living example of someone pursuing Christ,” Taylor said.

Tess Phillips, a junior fashion merchandising major on the leadership team, said she met Salter through Frog Camp and immediately recognized his ability to mentor.

“His teaching was the first to get me excited about Scripture,” Phillips said. “Dustin is very humble and creates an inviting environment for both believers and nonbelievers in any stage of their spiritual walk.”

Phillips said she is attracted to RUF because the teaching is scripturally based and the music is traditional, but has an upbeat twist.

Salter said he enjoys working with college students the most and would prefer no other age group. His hope for TCU RUF is to produce a large amount of RUF interns, Salter said.

“I have the best calling in the world,” Salter said, “and I get to wear fleeces instead of suits.