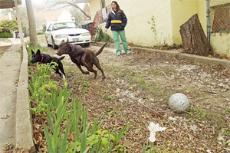 Madden makes her way to the kitchen, all the while her 1-year-old Dachshund, Tucker, nips at her heels.

In Whittington’s room, Tulip, her 2-year-old Maltese, hears the commotion outside the door and begins to whimper, hoping to be let out.

Hearing the commotion, Lindsey’s dog, Rowdy, is pawing at her bedroom door to be let out with the other dogs.

“When they wake up, they get really hyper,” Whittington said, “You’re like, ‘Please just let me sleep!'”

And then there are the two turtles, named Mikey and Donny.

“It takes all three of us to clean the turtle tank,” Natalie Madden said.

For many college students, moving away from home also means moving away from cherished family pets and into small dorm rooms. Some, like the Maddens and Whittington, buy or adopt pets as soon as they begin to live off-campus.

“I didn’t think about it much in the dorms,” Whittington said, “but when I got out, I really wanted one.”

Caring for a pet was a big adjustment, Whittington said.

“At first, it was overwhelming,” Whittington said. “It takes a lot more than you think.”

The diminished space of an apartment is also a challenge, Whittington said.

“I wish we had a yard for them,” Whittington said. “When I take her home, she stays outside. She doesn’t want to come in.”

“One hundred acres might be ideal for a dog,” Marsh said, “but they can adapt to a smaller space.”

“I feel guilty sometimes when they’re here alone,” Whittington said. “I feel sorry for them.”

Often, students are tired when they come home, only to find their dogs well-rested and full of energy.

“You’ll never have the same schedule,” Marsh said. “They need some kind of physical and mental stimulations.”

Marsh suggests spending a few minutes with the dog before leaving.

“It doesn’t take hours of time,” Marsh said. “You just need something to get their brain working.”

Interacting with each other during the day tires the dogs out, Whittington said.

“They play with each other,” Whittington said. “We wanted to get more dogs so they wouldn’t be lonely.”

A dog’s hyperactivity is part of its hereditary desire to bond, Marsh said.

“Dogs are a pack animal,” Marsh said. “They want to be part of you.”

If she can, Natalie Madden said, she comes home at lunch to let the dogs out.

“I’m definitely staying up later now to get things done,” Madden said. “But I look forward to coming home to see them.”

Like Madden, time is often an obstacle for students caring for pets.

Sherri Clements, facility director for the Humane Society of North Texas Southwest Adoption Center, said many students find themselves in over their heads after adopting animals.

“Not enough time is the No. 1 reason for surrender,” Clements said. “They also don’t do the research on different breeds.”

The desire to have a pet often outweighs some college students’ ability to own an animal, Clements said.

“I’m really leery about adopting animals to college students, mainly because they don’t know where life is going to lead.” Clements said. “Some people get married and have to give up pets because their husband is allergic.”

Before settling on Tulip, Whittington, who has pet allergies, did extensive research on different breeds.

“I owned Maltese books before I owned a dog,” Whittington said. “I needed a dog that wouldn’t shed.”

Before she settled on Tucker, Madden said, she researched breeds as well.

“We even took Tulip with us to see which dogs she got along with,” Madden said.

Marsh said most students with dogs do understand the responsibility of pet ownership.

Having roommates invested in the dog is a benefit, Marsh said.

“Living with other people is an issue,” Marsh said. “Often we ask the roommate to come in as well. If they can’t, we tell them ‘here’s what they need to do.'”

The Maddens and Whittington help each other out by trading duties.

“If one of us takes our dog out for a walk, we take all of them out,” Whittington said.

She said her mother also takes care of the dogs when the girls are too busy.

The flexibility of college life may provide more time than the working world, Marsh said.

“The best dog I ever had was when I was in college – when he did everything with me,” Marsh said. “Now I work 60 hours a week and have two kids.”

For students on a budget, the financial responsibility of a pet can become a burden.

“When I was in school, I didn’t have any money,” Marsh said.

Whittington said she had to pay a pet deposit along with her roommates.

“It’s not too bad if it’s split between three people,” Whittington said.

Beside a pet deposit, veterinary care can also be expensive.

“I’ve spent a lot of money on Rowdy, especially in Fort Worth,” Lindsey Madden said. “Going to the vet costs four or five times as much here than it does back home in Midland.”

To offset the cost, Lindsey Madden said, she takes him to her parents’ home for grooming and shots.

Whittington said the cost of getting shots adds up and can get expensive.

“Some people don’t get shots for their dogs,” she said.

Whittington said she makes sure Tulip has proper care because she couldn’t imagine life without a dog.

“They’re just so excited to see you when you come home,” Whittington said. “They say people with dogs lead happier lives.”

The desire to connect with a dog is not unique to students. For many, dogs offer a special friendship that transcends human relationships.

Rhonda Larsen, a registered nurse at Harris Methodist Hospital, which allows some dogs to visit patients in the hospital, said patients often respond better to their pets than family members.

“When their dog walks in the door is when patients’ faces really light up,” Larsen said. “That’s when you really tell the difference.”

While raising a dog in a small space with little time and a budget can be a weighty challenge, Marsh said, he would never discourage a student from owning a dog.

Whatever spare time the Maddens and Whittington have is usually spent talking about their dogs.

“It’s all we ever talk about,” Whittington said. “We sound like a bunch of mothers.”

“If I only had Tulip,” Whittington said. “I’d probably get another dog.