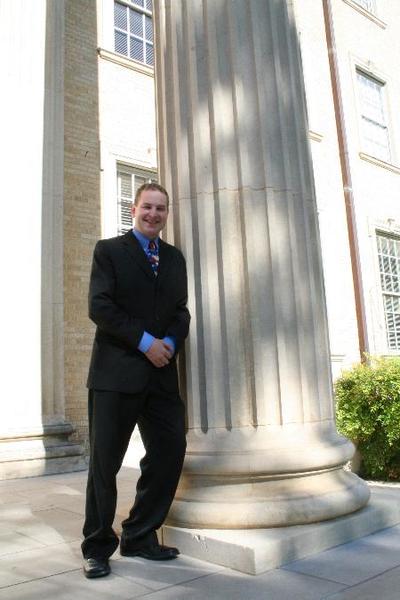 What does it take to run for the position of city councilman?

Well, you must: be 21 years of age or older, be a registered voter, pay a $100 application fee or obtain 250 signatures, be a one-year resident in your district and own a comfortable pair of sneakers.

OK, so the last requirement isn’t mandatory, but for Glen Bucy, a junior political science major and candidate for the Fort Worth City Council, it has been an extra little kick on the campaign trail.

Bucy wakes up at 5 a.m. every morning and completes Army ROTC physical training, goes to class, returns home late in the afternoon and then goes door-to-door, getting his name out to the neighborhoods in his district.

When he is not working out, going to class, studying or attending Fort Worth City Council meetings, Bucy is busy campaigning and converting lists of voters’ addresses into maps using Google Earth.

“School and campaigning is a full time job,” he said.

Bucy and his wife, Leide, TCU alumna of Dec. 2006, take to the streets most afternoons, knocking on the doors of neighbors, providing face-to-face contact with those who will be voting in city elections on May 9.

“It is something people just don’t do anymore,” Bucy said. “What I lack in campaign money, I will make up in knocking on doors. There is something very personal about this.”

After high school, Bucy enlisted in the military and spent a year serving in Afghanistan.

He is currently a member of the Texas Army National Guard.

His interest in running for City Council spawned because he said he feels there is a lack of community participation in local government.

“In the 2007 election, less than 100 people between the ages of 18 and 29 voted,” Bucy said. “What people don’t know is that the election can literally come down to ten votes, so your vote really does mean something,” Bucy said.

When he decided he was going to run, he said he sought counsel from political science professor James Riddlesperger.

“The decision was his,” Riddlesperger said. “But there are few people that, when push comes to shove, decide to run for public office.”

Riddlesperger said being a city employee is a lot of work for no money, especially with the recent financial shortfall.

“He has the fire in his belly,” Riddlesperger said. “That is old political jargon for being a good candidate for office.”

Riddlesberger said Bucy’s aspiration to be a public servant is a good fit for his military career.

Bucy studied the key issues in Fort Worth, thought about how to better serve the people in his district and began knocking on doors.

Our city’s leadership needs to be held accountable for their actions and be reminded about why their job exists: to help the people and not just big businesses,” Bucy said.

Bucy has gained the support of many small businesses in his area, just by knocking on their doors and telling them about his plan to initiate changes in their neighborhoods.

Bucy said it is important to him to have someone in City Hall without special interest in oil and electric companies but instead a real interest in what the people need, like the completion of road construction projects” he said.

District 6, Bucy’s campaign territory, lies between I-35 and Granbury Road.

Bucy said he will continue making tracks, knocking on doors and hoping for the best.

“I think people are still excited about politics, especially after the win of Obama,” Bucy said. “Hopefully that excitement will encourage more people to vote in the city elections.”