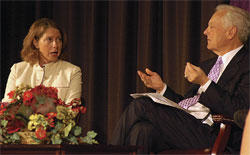 Though no one knows how the news will be distributed in the next five to 10 years, the basics of journalism will remain the same, Bob Schieffer told an audience Wednesday night at the second annual Schieffer Symposium. “No matter what medium we get our news from,” Schieffer said, “the integrity of the individual reporter – that is the thing that will make journalism useful.”

Schieffer said there is no way to predict how communication will change in the coming years, and print and broadcast journalism are all expanding the ways they deliver the news.

He said before, when he printed a story on the front page, he might receive three reaction letters. Now, he said, if reporters write something on the Internet, they could have 500 e-mails before they get back to their desks.

“The Internet is a more personal medium,” Kramer said, but, “We’re not Google; we’re not Yahoo. We have to take the debate, join the debate, but we have to maintain that separation — we’re finders of fact.”

Judy Woodruff, who has covered politics and news for CNN, NBC and PBS, said that with additional ways to receive information, more people will pay attention to the news.

“More people around the world are finding ways to participate in the great debate of our time,” she said.

Jill Abramson, managing editor of The New York Times, said despite new mediums like blogs, the public still wants to get accurate news from authoritative sources.

She said the newspaper had journalists sleeping in cars and riding with ambulances to find the full story on Hurricane Katrina, and while Internet bloggers do offer new ways to get information and opinions, professional journalists are still needed to present the fair story.

Schieffer said most of what CBS did during 9/11 involved clarifying rumors that surfaced on the Internet. He said this proves that with additional mediums it is increasingly paramount for journalists to correct any mistakes.

While the panelists agree on the uncertainty of the future of journalism, each told students that the most important thing they can do is to gain experience in the field.

Abramson said if students learn how to write clearly, they will be prepared for any communication platform.

In additions to internships, Schieffer said, students must be persistent. He said he applied at CBS for five years and was hired by mistake at the Washington Bureau. He said he walked into the office without an appointment and accidentally took Bob Hager’s interview.

“The secretary got her Bob’s mixed up,” Schieffer said.

Tommy Thomason, director of the Schieffer School of Journalism, said the symposium should have reinforced for students how much communication is changing, but that the characteristics of journalism will hold strong.

Schieffer said if journalists can continue to present news in ways people understand, it will continue to be a vital part of society.