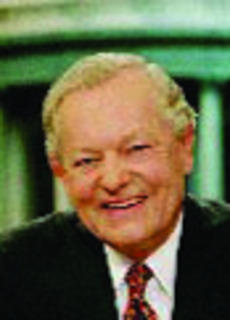 Sen. Barack Obama and Sen. John McCain will be sparring over issues like the economy in the last presidential debate tonight. The only man standing between them, CBS News broadcaster and TCU alumnus Bob Schieffer, said one will walk away a clear winner.

Schieffer said he’s trying to not think about how important the last debate will be, but that tonight could be the “tipping point” for either candidate. He said he expects both candidates to be more aggressive and said they will be debating in more of a classic sense than the last two meetings.

“My hope is that they will question one another and if they don’t, I’ll jump in with questions,” Schieffer said. “The whole point here is to get them to ask the follow-up question.”

Schieffer said he wants to have enough time for the debate to be split up into nine segments that run nine minutes long. Each segment will cover one topic. At the end of the debate, each candidate will have a two-minute closing statement. Schieffer said he doesn’t want to telegraph the kind of questions he’s going to ask but said he’s going to start with the recent developments in the economy. Both candidates and the moderator will sit at one table rather than stand at separate podiums.

“My job as the umpire will be to keep one or the other from filibustering,” Schieffer said. “And another thing I’m going to try to do is if they don’t directly answer the question it will not embarrass me to say ‘That’s not the question I asked’ or ‘You haven’t answered this question.'”

Tonight’s debate won’t be the first Schieffer has moderated. Schieffer moderated the third and last presidential debate between President George W. Bush and Sen. John Kerry in 2004. Schieffer said he has been preparing the questions by studying the transcripts of the past two presidential debates, taking out newspaper clippings and talking to other reporters about the issues. He added that the process is similar but more detailed than the way he formulates questions for “Face the Nation,” the public affairs show he hosts every Sunday on CBS.

Schieffer said he’ll try to ask questions about some topics that have been overlooked in the past two debates. Schieffer said he thought Obama won the first debate based on points and that the second debate was a draw; but tonight’s debate will have a “decisive win” for either candidate.

“I think this is still anybody’s election. Obama has shown some movement. He’s opened up a lead in some of these battleground states, but I don’t think anybody is measuring curtains for the Oval Office yet,” Schieffer said, adding that a lot can happen in three weeks.

Schieffer said he feels honored and a little surprised to be chosen as moderator of the last debate. As a reporter for the Daily Skiff, he said he dreamed of becoming a newspaper reporter in Texas but never imagined that his path would lead him to the podium.

“I got into this just because I thought it was fun,” Schieffer said.

Adam Schiffer, assistant professor of political science, said this debate might be a little more aggressive but will still be constrained by the format. The McCain campaign strategy has turned aggressive and negative in the recent weeks with personal attacks on Obama’s association with William Ayers, and McCain might bring that up in the debate, Schiffer said. Ayers is a former member of the radical “Weather Underground” group that protested the Vietnam War in the 1960’s by bombing government buildings. Ayers became a professor and community activist who served on the board of an anti-poverty group with Obama.

But the more important issue to voters will be the economy, Schiffer said. He said there are almost no truly undecided voters left, but instead voters he calls “persuadeables,” noting it will take more than a debate to make a big difference, unless Obama makes a serious mistake or gaffe.