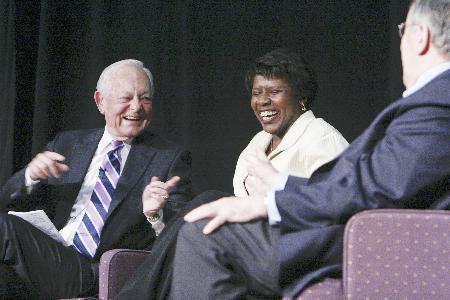 Alumnus and host of CBS’ “Face the Nation” Bob Schieffer said he could not imagine a country without a newspaper in front of a sold-out crowd at the fifth annual Schieffer Symposium in the Brown-Lupton University Union Ballroom on Wednesday night.

This year’s Symposium focused on the economic crisis, the media coverage of President Barack Obama’s performance and the future of journalism.

The panelists included David Brooks, a columnist for The New York Times; Gwen Ifill, moderator and managing editor of PBS’ Washington Week and author of “The Breakthrough: Politics and Race in the Age of Obama;” Trish Regan, Emmy-nominated correspondent and co-anchor of CNBC’s “The Call;” and Mark Shields, a nationally syndicated columnist and a commentator on PBS’ “The NewsHour with Jim Lehrer.”

The symposium started off with a discussion about how well Obama has handled the problems during his first months in office.

Shields said Obama is managing things well and that his political skills are the reason why.

Schieffer said that while he was moderating the final presidential debate he noticed that Obama stayed composed throughout.

“He is one cool customer,” Schieffer said.

On the topic of how well the media are doing to cover the Obama presidency, every panelist agreed that there is some form of bias, regardless of whether it is conscious.

Ifill said in a press conference held before the event that the media are obsessed with whatever makes the most interesting story.

“The press is obsessed with everything he says and everything she wears,” Ifill said of Obama and his wife, Michelle.

Shields said the media have a tendency to favor the winner in any campaign.

Brooks said the majority of the people he works with are in favor of Obama.

Brooks went on to say that even if journalists are not aware of their biases, they have them. However, he said he believes the press is being fair in covering Obama and that most reporters are committed to journalism, not personal politics.

Shields said he doesn’t think Obama is getting a free ride, but part of problem is that Republicans are currently voiceless.

The future of journalism was also a topic of concern.

“It seems like it is about a paper a week now,” Schieffer said, in reference to the newspaper industry crisis.

The immense use of the Internet and the progression of technology is the primary cause of the concern for the future of journalism, the panelists agreed.

“Online blogs and such have taken over,” Brooks said.

Schieffer said the main problem with the Web is that there is no editor and anyone can post anything they want regardless of whether he or she is informed about the topic.

Ifill said some reporters use the Internet as their outlet, and that it is not the panel’s intent to condemn all bloggers, but standards are necessary.