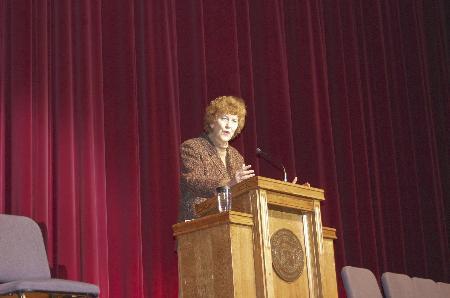 Mary Evelyn Tucker of Yale University had no problem reconciling science and religion, and as people continue to better understand science, she said, their idea of the divine will be enlarged.

Tucker, a senior lecturer and research scholar at the School of Forestry and Environmental Studies at Yale University, spoke Wednesday night to an almost-full Ed Landreth Hall, as a guest of the Brite Divinity School.

Her speech, titled “Reconnecting Humans to Earth Community: Imagining a New Way into the Future,” touched on issues of global climate change, evolution and environmental degradation, but the overarching theme of her talk and the question she asked her listeners to take home with them was, “What kind of story do you want to be a part of?”

Complimenting the university’s mission statement, “to educate individuals to think and act as ethical leaders and responsible citizens in the global community,” Tucker said that humans must begin to see themselves as “planetary people,” rather than focusing only on how they connect with the local community. She said they must begin to look more closely at their relationship with the global community, and finally to the earth community, which includes ecosystems and what makes them up.

“Your generation is the first truly international generation,” she said.

With the availability of instant communication around the world, the college-age generation will be able to easily acquire a global perspective and become citizens who embody the university’s mission statement, Tucker said.

Tucker said that 20,000 animal species go extinct each year, and spoke of the endangerment of the horned lizard in Texas. Whereas this example is one that hits close to home, Tucker said, the American mindset of invincibility and distance must shift for survival of life on the planet.

Turning to religion, Tucker said the challenge for all faiths is to realize that all life is sacred.

“We have not yet begun to address that in its fullness,” Tucker said.

Tucker said her own story began in the 1960s when she became involved in the Civil Rights Movement. She studied in Japan and said she was completely unprepared for the environmental degradation that she saw there and continued to see over the next 35 years.

Returning home and attending Columbia University, she began to ask herself what she could contribute.

“There is a sense in the human spirit that nature is a sacred process,” she said.

This desire to contribute led her to focus her studies on the relationship between religion and ecology, she said.

The integration of science and religion is a sacred story, Tucker said. While people have learned a greater sense of compassion and care for the earth, they need to constantly be reminded of the scale and complexity of what they are facing, she said.

Julie Morris, a senior communication studies and Spanish/Latin American studies major, said religious communities in the United States need to develop a greener mentality and, as Tucker said, begin to discuss how to have a more planetary world view.

Sam McMillen, a senior anthropology and biology major, said he hopes Tucker’s belief that the religious body will be the biggest source of the environmental movement is something students will take away from her talk.