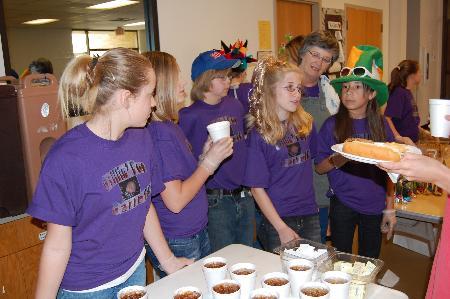 Garrett Gullion has a hole in his heart, which is also missing a valve. His oxygen level is dangerously low and he has Down syndrome. Garrett is two months old.

Starpoint School teacher Sherry Oliver said she has known the child’s family for four years. With help from students in her third period technology class, Oliver organized the cookout to raise money to fund the heart surgeries that Garrett desperately needs, but that insurance refuses to pay for.

According to Oliver, more than $4,000 was raised and more donations are expected.

Members of Pi Beta Phi sorority and Sigma Chi fraternity raised $1,562 for Garrett and plan to continue their fundraising efforts for the next three weeks.

Oliver fought back tears when she announced the generous gift from TCU students.

“This entire college is backing you guys up,” she said. “This is an ongoing campaign.”

“Our chapter and the Pi Phis were at a risk management meeting Wednesday night, and we passed the money bucket around the whole time to raise money for Garrett,” he said. “Evan (Berlin), our president, said we could Tase him if we raised $350.”

Berlin showed his burn marks at the cookout.

“It was awful,” Berlin said. “Absolutely the worst pain I’ve ever felt.”

Berlin was not the only one to face the Taser.

“After that, the trend just caught on and other people agreed to do it to raise more money,” Conway said.

“We’re raising as much as we can,” she said. “We want to challenge others to do the same.”

“I just get a lot of fulfillment out of coming and hanging out with these kids,” he said. “That’s why I wanted to support this cause.”

Members of Pi Kappa Phi, a fraternity with a history of supporting KinderFrogs, a school affiliated with the Starpoint School, were also in attendance. Adam Wilson, a sophomore accounting major and member, said last year his fraternity recorded 341 volunteer hours at the school.

“We will always come out to support these kids at KinderFrogs and Starpoint,” he said.

Emily Schmeltekopf, a junior early childhood education major, said about 20 education majors stayed after their student teaching at the Starpoint School to attend the event.

Despite worries that Garrett would not be able to attend the cookout for medical reasons, the guest of honor was there, as well. He was rushed to the hospital Wednesday because of a fever and dangerously low oxygen levels.

Starpoint students, who were busy cooking hot dogs and serving their guests, said they were excited by the student support at the cookout.

“We’re so glad that all of you guys came out to help,” said Melissa Legvold, a fifth grader.