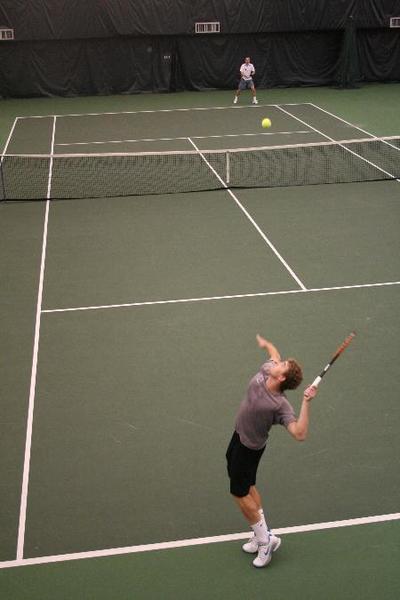 Standing tall with the No. 1 seed in the Mountain West Conference Championships, as well as a share of the regular season conference title and home-court advantage, the men’s tennis team will try to win it all for the first time since 2006.

The team (18-7, 5-1), ranked No. 36 in the nation, is two years removed from its first conference championship, where the Horned Frogs won both the regular season and tournament titles in their first year in the Mountain West.

This year’s championship tournament will be April 23 to 26 at the Friedman Tennis Center. This is TCU’s first year hosting the Mountain West Conference Tennis Championships. Home-court advantage should play some role in the series for the Horned Frogs, who only lost once on their own courts this season.

The team finished its conference season with a trip to Provo, Utah, for three matches, losing its only conference contest to the Utah Utes.

Head coach Dave Borelli said balls fly differently there because of the thin air in the high altitude.

“We’ve played three of those matches in high atmosphere so it’s nice to be back where we’re comfortable,” Borelli said.

The team started 2008 with its longest winning streak since joining the MWC by winning its first nine matches before its eventual fall to Oklahoma State University, its only home loss of the season.

Last season, the Horned Frogs had a tough stretch against non-conference opponents, losing eight consecutive matches early on, but righted itself in conference play, finishing with an identical 5-1 record, good for second in the conference.

The team reached the semifinals of the 2007 tournament where it fell to UNLV, which went on to win the tournament championship.

Borelli said no matter what happens, he sees this season as a big step forward for the team, which is overcoming NCAA penalties from various violations that took place before Borelli took over.

“We were ranked 68, we lost a scholarship and we couldn’t recruit off campus,” Borelli said regarding the team’s restrictions. “Most of the pressure is behind us now. We’re in a very good situation.”

A combo of senior leadership and youthful development has helped lead the team this year.

Senior Cosmin Cotet has been a force this season, and he is currently ranked No. 36 nationally and has a 19-6 record this year.

As the No. 1 singles player for TCU, Cotet faced each team’s top player in every match. Against Oklahoma State University, Cotet, who was then ranked No. 83, defeated then-No. 10 ranked Oleksandr Nedovyesov. Nedovyesov is currently ranked No. 3 in the nation.

The win boosted Cotet all the way to No. 21 nationally, his highest ranking of the season.

Cotet is also part of a formidable pair with junior Kriegler Brink, who plays as the No. 4 or No. 3 singles player for the Horned Frogs.

Brink had a near perfect season, finishing 21-2.

Brighiu has earned the No. 2 singles spot for the Horned Frogs this season.

Nichols and Seider have paired up as the No. 3 doubles pair for TCU, and went 13-8 this season.

Borelli said he sees the team’s youth as an advantage because this is only year one of four for these talented freshmen.

He said the team has grown this year, and sees the conference championships as just the next step for the team to continue to get better.

Brink said since the freshmen have all played every Mountain West team, he does not really think they should have a problem in the tournament.

“It’s a chance for some guys to really step up,” Brink said.

Because of its the No. 1 seed, the team has a first-round bye, and will play the winner of the first-round UNLV-BYU matchup.

Brighiu said the team can use the first day to its advantage because it can study other teams’ strategies.

Borelli said the first day has little to do with strategy, but does give players the opportunity to attend class that day if they need to.

TCU defeated BYU 6-1, and UNLV 5-2. However, The Runnin’ Rebels did defeat TCU in the semifinals last year in Colorado Springs, Colo., where the two teams will meet this year if UNLV wins its first round game.

Brink said every MWC team is good, but he said on paper the Horned Frogs appear to have the advantage and should win.