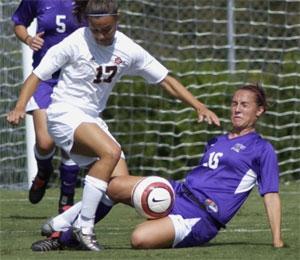 TCU’s season came to an end Wednesday against Nevada-Las Vegas in the first round of the Mountain West Conference Tournament when the Frogs fell to the Rebels 3-0.Head coach Dan Abdalla said he was proud of his team despite the outcome of the game.

“I was very happy with the effort they gave,” he said. “They left everything on the field, kept battling until the end.”

Neither team scored in the first half, but UNLV’s Katie Carney broke the tie early in the second half.

Haley Partridge and Erica Frizzell also contributed one goal each for the Rebels, while goalie Jenna Huff needed to collect only one save.

“I feel very fortunate and honored to represent TCU on the team,” Hill said, “but hopefully we can do better next season and have more people on the team than just me.”

She said the team’s first season under Abdalla, as well as its first year in the MWC, served as a valuable learning tool.

“Our first year wasn’t as good as we expected,” Hill said. “Now we’ve seen everyone and know what to expect, who to watch out for, and hopefully we can go out and get them next year.”

While UNLV beat TCU to advance to the semifinals, the sixth seed, San Diego State, managed to upset No. 17 Brigham Young 2-0.

Fifth-seeded New Mexico also upset Wyoming 1-0, while No. 1 Utah beat Air Force 3-0 to round out the final four teams in the tournament semifinals.

Abdalla said the rest of the tournament is up for grabs.

“BYU losing showed that anyone can beat anyone in the tournament,” he said. “Obviously, I’ll be rooting for UNLV because of that being my old group of kids, but it’s anyone’s game.”

Despite the team’s early exit from the tournament, junior defender Breanne Kaldheim said better things could come for the Horned Frogs next year.

“We’ll add new recruits to a strong foundation and continue to work just as hard as we did this year,” Kaldheim said.