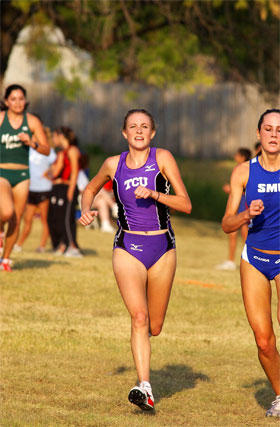 Though senior distance runner Katrina Zielinski’s TCU running career is approaching its end, the impact she has had on her fellow runners is not likely to be quickly forgotten.Zielinski, who placed 11th overall at the C-USA meet during the 2003 cross country season, helping her team to a second-place finish and earning her third team all-conference honor, said she made an effort to be a good teammate by making sure her teammates felt confident.

“I always tried to encourage them and be there for them,” Zielinski said. “I wanted to help them do their best.”

Sophomore TCU cross country and track member Halie Bullin said this encouragement was one thing that made Zielinski such a crucial part of the team.

“She really helps boost people’s confidence in themselves,” Bullin said. “She always knows exactly what to tell people to make them feel better when they had a bad race.”

Zielinski was given the extra opportunity for lifting up her teammate’s attitudes when she was elected team captain during her sophomore year. Cross country and track coach Patrick Cunniff said holding this position, along with the fact that she has had the most college running experience of anyone on the current team, has elevated her as an example to the rest of the runners.

“Katrina provides a lot of leadership to help the younger girls get used to college track,” Cunniff said. “She leads by example in the right way and with the right ethic. She provides positive support to the team.”

Cunniff also said that though the team will be sad to see her go, he knows she will be successful in her pursuits in life.

“She really brings a great attitude and energy to the team that we are really going to miss,” Cunniff said. “She has such great work ethic, patience and enthusiasm, even when things are hard and challenging.”

Zielinski, an early childhood education major, said next semester she will still be in school doing her student teaching, though she is unsure where she will teach. However, her four years of running eligibility will have expired.

“I couldn’t do my student teaching and be running for the team at the same time, and I really wanted to continue running,” Zielinski said.

She also said after this year, she plans on continuing to run on her own and maybe do a marathon or triathlon later in life. But the first thing she is going to do is take a break.

“I just want to take it easy for a little bit,” Zielinski said.

Zielinski, who graduated from Marcus High School in Flower Mound, began running when she was in the seventh grade. When she started doing well in her freshman year of high school, she said, she decided she really wanted to stick with it. While at Marcus, her team won the state meet twice, and she earned her best placing her junior year at state when she finished eighth.

“It was exciting,” she said. “We had a really good team and were really close, so it helped us run well together.”

Zielinski said she chose to run for TCU because she was attracted to the atmosphere, the team and the coaching staff.

“Everyone was so friendly and seemed open to all people,” Zielinski said. “I thought it would make a comfortable transition to college.”

Reflecting upon her first race for the Frogs, Zielinski said she was anxious and unsure of what the outcome would be.

“I was really nervous,” she said. “I knew I was running on a whole different level, and I didn’t know what to expect.”

After she finished the race, in which she placed fifth, Zielinski said, she was more at ease and more confident in her abilities in competing at the collegiate running level.

“I felt more confident and knew I was not in way above my head,” Zielinski said.

Zielinski said she hopes to leave behind some of her wisdom and encouragement to all of her teammates.

“I would just tell them to have fun without putting pressure on themselves,” Zielinski said. “Just enjoy the opportunity.