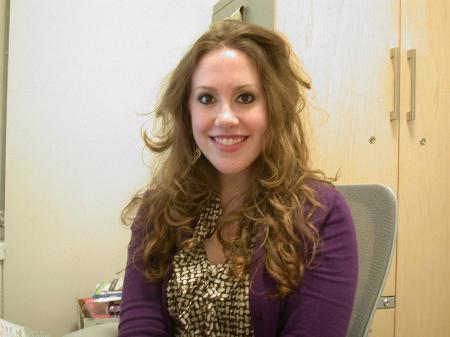 Trekking through the Scottish terrain was not something Kristen Chapman was accustomed to. The senior marketing major had never camped a night in her life, so five days in the wilderness was quite a feat.

But as she rambled through the woods alone one night, she started to feel something change. With each step, everything that had caused her anxiety before seemed to be falling at her feet. Soon she came to the edge of the tree line. As she took a few more steps, she found herself in a clearing in the middle of the stars.

“I felt like things were weighing me down. It was a good chance for me to stop,” Chapman said. “I realized how awesome life is.”

Chapman grew up in Sugar Land, a city that originated as a sugar plantation and has been the headquarters for the Imperial Sugar Company since 1843. The commodity can also be used to describe her personality. Chapman’s curly locks, endearing smile and sanguine eyes support this claim. Her values reflect her Southern roots; family, friends and faith are things Chapman said are top on her list of priorities.

Chapman’s parents, who have been married for 27 years, and her younger sister, Kelsey, 15, now live in Prosper. Chapman said they are a family of positive thinkers.

In high school, she was a “serial student organization member,” Chapman said. Choir, Peers As Leaders (PALS) and student council were her main focuses. She served as student body vice president and class favorite, Miss Clements, her senior year. College provided her with just as many opportunities to get involved as well.

Getting the Job Done

Originally, Chapman had pictured herself at a school like New York University in a big city far from home. But, after being accepted to NYU, Chapman reconsidered.

Her grandmother died during her senior year of high school and Chapman saw the difficulty her aunt, who lives in London, faced with the distance from family.

Chapman chose TCU for its small, personable feel and the prestigious Neeley School of Business. She is thankful for her decision because of the numerous opportunities she has been given and things she has been able to be a part of, she said.

Chapman has served as Programming Council Chair in Student Government Association for two terms since January 2007. In her terms, events including performances by singer Tyler Hilton and Full House star Dave Coulier and a luau promoting safe Spring Breaks as well as CD release parties have taken place.

She was also instrumental in making the Pat Green concert and larger TCU holiday events possible.

“She’s got a lot of energy and enthusiasm for everything she does,” said Merillat Pittman, Programming Council Homecoming director. But she is also very task oriented,” She brings a really good, lighthearted side to it but also knows what needs to be done.”

Her job has not always been painless. In October 2006, Chapman, who was then the special events director helped the Homecoming director with the Mr. and Ms. TCU competition and had to disqualify three Ms. TCU candidates for soliciting votes on Facebook, a social networking Web site. The cases were later taken to the SGA Judicial Board and overturned.

“It was one of the first times when I actually had to step up in Programming Council and make a decision that I knew was the right one, but I also knew it might not be the most popular one,” Chapman said. “I knew that I had to make an ethical, value-based decision and I don’t regret it to this day.”

Outside of SGA, Chapman is a part of Neeley Fellows, Sigma Kappa sorority, Student Foundation, American Marketing Association and Order of Omega, to name a few.

As account executive, Chapman served as a liaison between the client and the creative team. She worked on accounts including Red Lobster Seafood Restaurants and Life Walk, an event that benefits AIDS Arms Inc.

As the only intern at the time, Chapman was able to directly participate in promotional merchandising. She worked on menus and newspaper ads and participated in photo shoots and conference calls.

Chapman was able to see the “Endless Shrimp” promotion for Red Lobster from start to finish. She even planned to go back to Latitude for a “shrimp-a-thon” to celebrate the campaign with her former associates, Chapman said.

“I think the hardest thing about college has been making sense of all of the opportunities provided to me, both educationally and socially, and using them to truly define who I am as an individual,” Chapman said.

An experience that helped Chapman channel herself and find her voice was a trip across the pond. During the Winter Break of her junior year, Chapman traveled with a group from the business school to the United Kingdom.

After a few days in London studying leaders from history, the group moved on to the Isle of Skye in Scotland. Here, near the misty sea where winds sweep the water onto the jagged cliffs, they set up camp.

The purpose of being in the Scottish countryside, miles from the nearest town, was so the students could reflect on themselves, gain self-awareness and assess both what it means to be a leader and how to guide their world to change, business school Assistant Professor Gregory K. Stephens said. Stephens led the team on the trip.

They also were asked to dream and develop ideas of their purpose after college to affect the world around them.

“I don’t think she will be content with just having a career,” Stephens said. “I think she will want to have a broader impact, and I think she is fully capable of that. I suspect that her influence will be through her quiet relationships with other people.”

Chapman agrees. In her paper for the program she wrote: “I want to be a good Samaritan, a friend, an advocate and a smiling face to someone in need. I want to eventually trade in the power suits and portfolios of my career and find something more useful with my life, where it is not about what you are wearing or who your client is but what you are doing for others. Critics may find this dream absurd or not ‘grand enough,’ but it is my dream and I am determined to make it a reality.”

While she has come so far, Chapman is still molding herself, stretching her strengths and bending her weaknesses. Her positive attitude helps to scale back the impact of her time management errors.

But, it does not look like that will encumber her long because she has been compared to an American dignitary.

“If I were to compare her with prominent leaders that we know about now, I think I would probably compare her to Colin Powell,” Stephens said. “He’s not in your face, but most people that I know, whether they agree with him or not, respect what he has to say and will listen to what he has to say. That’s the way I see Kristen.”