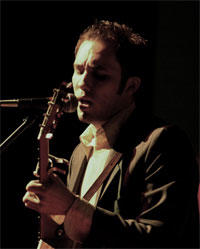 It all began with a coupon.For many, a coupon could be a ticket to buyer’s remorse, but for Brad Skistimas, 22, of Five Times August, it was the beginning of a career.

“I had a coupon for two free guitar lessons and I was getting in to The Beatles at the time, so I asked my mom if I could go,” Skistimas said.

Skistimas, a Dallas native, is a singer/songwriter who calls his sound “acoustic pop/rock.”

Skistimas said his music has been compared to artists, such as Jason Mraz, Dave Matthews Band, John Mayer and sometimes Maroon 5. However, he said he continues to credit The Beatles with having had the greatest influence on his music.

The majority of preteens in the early ’90s were attempting to moonwalk with Michael Jackson, but Skistimas gained an interest in Jimi Hendrix and other musical icons of the past due to the influence of his brother.

“At first I didn’t understand why he was listening to all these dead guys, but then I got into it,” Skistimas said.

He started Five Times August when he was 17 years old and recorded his first album at age 18.

“I had just gotten out of high school, and I recorded that first album at home with an acoustic guitar and a microphone,” Skistimas said. “I just started selling them to people I knew from school.”

His newest album, Fry Street, is “a culmination of the last four albums,” Skistimas said.

Skistimas briefly attended college, but said he was constantly skipping class to look for venues. In pursuit of a career in music, he took audio engineering classes at the Dallas Sound Lab School for the Recording Arts.

Over the years Skistimas has opened for musical acts such as Little River Band, Kool & The Gang and Dan Dyer.

He said the most fun opening for Jackopierce.

With past girlfriends as a source of inspiration, most of his lyrics are about love.

His career really picked up when the music supervisor for MTV’s “Laguna Beach” sent Skistimas an e-mail requesting a copy of music he had found online.