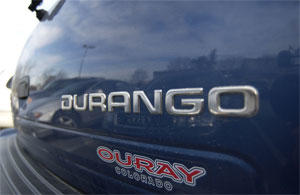 Ford Broncos are from Mars, Toyota Sequoias are from Venus, or at least that’s the thesis of a TCU assistant marketing professor.Consumers assign gender to products and remember them easier if product names correlate with a perceived gender, said Eric Yorkston, an assistant professor of marketing.

Yorkston’s research findings were cowritten with the late Gustavo de Mello, a former University of Southern California doctoral student, and published in the September 2005 issue of the Journal of Consumer Research.

For SUVs, the key is picking a masculine name that fits the rough terrain associated with SUVs, Yorkston said. The names Bronco and Durango are good examples because they both end in “o,” the Spanish suffix for masculine, he said.

However, the Toyota Sequoia, which ends in the prominent Spanish feminine ending “a,” contradicts this theory, Yorkston said. Also, some consumers associate Toyota with smaller cars, which might be hurting them in the SUV market that is dominated by Ford Excursions and Chevrolet Suburbans, Yorkston said.

He said this perception about making smaller cars could help Toyota do well in the midsize SUV market that features Ford Explorers and Chevrolet Blazers.

Greg Shae, a Toyota sales manager in Fort Worth, said he doesn’t think product names influence people’s decisions because they are looking for a quality car with good gas mileage, not a name.

Yorkston said he first noticed these unconscious responses while doing research on how a word’s sound affects buyers. He moved to a cross-cultural study that looked at similarities between English and Spanish while working with de Mello at USC.

“There was a lot of leakage from romance languages into the American English. Americans expect things that end in ‘a’ to be more feminine, just like the Spanish and French do.”

But there are examples of product names that have gotten around these gender rules, such as Makita, a hardware-equipment manufacturer that produces teal power tools.

When Makita came onto the scene, teal was considered an inappropriate color for power tools and the name went against gender-stereotyping rules by ending in “a,” but its quality of product allowed it to overcome these disadvantages, Yorkston said.

As a result, Makita was able to redefine its name and its color, but the Ford Edsel wasn’t.

“People didn’t like the name as well as the overall car design,” Yorkston said. “Mustang and Impala were a few of the names come up with by experts hired by Ford, but in the end, Ford named the car after his son.”

TCU professional-in-residence Mike Wood, who was vice president of advertising at RadioShack, said the Edsel, introduced by Ford in 1957, didn’t fail primarily on its name, but it failed because of the lack of a market for a midrange Ford.

Product names are reviewed for potential problems in their meanings, Wood said. Companies look at the name’s root origins as well as other cultural interpretations of the name, he said.

Yorkston said names are important but they aren’t the most important thing about a product.

“The name isn’t as important as the design, but it is going to play a role,” Yorkston said.