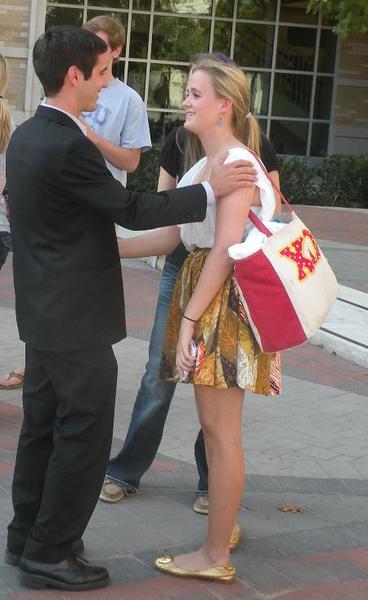 “I was nervous up until the very last minute because all eight of us who ran for elections are great people and very qualified,” Figueroa said. “But I am so excited to be president because I put my whole heart into it.”

Figueroa said he would like to meet with campus administration to see if the ideas he publicized during his campaign, like campus communicator, an instant messaging-style chat feature for students to use during their professor’s office hours, and opening certain parking lots to students after 5 p.m. would be feasible to implement in the next year. A dedicated member of Figueroa’s campaign staff, Jack Wright, a freshman English major, said he campaigned for Figueroa in and out of the Mary Couts Burnett Library, the Brown-Lupton University Union and Clark Hall for seven hours Tuesday. Wright said he felt like his hard work had paid off.

Garyn Goldston, sophomore strategic communication major and SGA’s election and committee regulation chair, said 30 percent of the campus voted during the SGA election, compared to the 40 percent who voted last year. Goldston said he thought the decrease of student votes happened because of the excitement of this week’s home game against Utah and ESPN’s College GameDay coming to campus.

Current student body president Kelsie Johnson, a senior strategic communication major, said she thought that some attention was taken away from SGA elections because of GameDay. However, Johnson said she was proud of the way all the campaigns were run and she was especially proud of those who are about to start a new term.