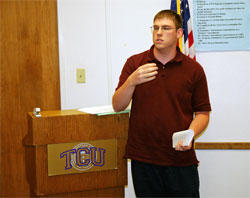 From junk food to vegan, organic to sugar free, TCU Dining Services has accommodated the myriad diets of students for years, but the meal offerings have yet to encompass the dietary needs of Muslim students.Student representatives engaged in little dispute as the House passed a resolution to support the Muslim Student Association in its efforts to have more offerings consistent with Islamic dietary requirements.

Jonathan Leer, a representative for the junior class, said a resolution simply means the House is showing support for action to be taken as opposed to a bill, which means action will be taken.

Now that the resolution has passed, the House can take its actions to the next level, which could include addressing the issues with Sodexho, Faculty Senate or other members of the administration, Leer said.

The Muslim Student Association approached David Young, a representative for the School of Business, with issues faced when dining on campus.

Many Muslim students have found it difficult to eat at places such as Sub Connection, where meat and cheese often come in contact with each other, which is against Islamic belief, Young said.

According to the Islamic Food and Nutrition Council of America Web site, Muslims can only eat permitted foods, known as Halal.

The site lists several food items that are not Halal including pork, alcohol and carnivorous animals.

The brief meeting brought the 92nd Session of the House of Student Representatives to a close for the semester.