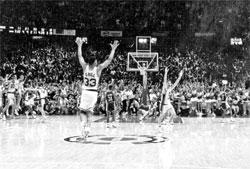 Anniversaries.They can bring the best or the worst out of people and elicit emotions ranging from jubilance to rage and everything in between. For Sean Woods, some anniversaries are inescapable.

Today marks the 15th anniversary that Woods, the director of basketball operations for the TCU men’s basketball team, hit what was thought to be the eventual game-winning shot in 1992 for his Kentucky Wildcats in the East Regional Final against the Duke Blue Devils.

“It seems like it has been a year or two ago,” Woods said in reference to the game. “They play it so much – they’ll never let it die.”

The “it” Woods referred to was the game’s final 2.1 seconds, which featured Christian Laettner’s improbable full-court catch, spin and fade-away buzzer-beater – a play that is remembered as arguably the most memorable sequence of events in the long and storied history of men’s college basketball.

Woods said a communication breakdown occurred between Wildcat players John Pelphrey and Deron Feldhaus on where to be on the court in regards to guarding Laettner.

“(Laettner) got a better shot than what he thought he was about to get,” Woods said.

In the end, Woods’ 21-point, nine-assist performance was not enough to overcome the final twist of what is perhaps the greatest college basketball game of all time. What was supposed to be a fairy tale Final Four appearance in his senior season turned into a nightmare in the blink of an eye, and brought Woods to the floor in agony.

“I just lost all power in my legs – just devastated,” Woods said. “I wished it was a dream.”

Although it was depressing to see Duke win the national title without much of a challenge the rest of the way during the 1992 tournament, Woods said time heals all wounds, and he looks back and is very grateful to have been a part of the game. Of course, that does not mean he has forgotten the outcome.

“The only down thing is that it’s considered the greatest game in college basketball, but (we) lost it,” Woods said.

After playing his final college game, Woods had a brief stint in the NBA with the Indiana Pacers and worked camps with several NBA players such as Antoine Walker and Tony Delk before entering the coaching ranks. From there, he went from high school assistant coach to his current post as director of basketball operations in a short period of time.

He said that although this past season, his first at TCU, was a rough one for the men’s team, he is confident that his winning background will contribute to better times for the Horned Frogs basketball and head coach Neil Dougherty, who he said he enjoys working for.

“I just want to be able to help as much as I can,” Woods said. “I want to help coach Dougherty have success here at TCU.”

His arrival at TCU also has given Woods the chance to team up with his stepson, Martiese Morones.

Morones, a freshman point guard, said that after signing his letter of intent in April 2006, Woods was offered the job of director of basketball operations shortly thereafter. Woods was officially announced as director of basketball operations in August 2006. Morones said that while the clip of Laettner’s shot still results in flashbacks for Woods regarding what could have been, he remains proud of his stepfather and all that he has been able to accomplish throughout the course of his post-Kentucky life.

In Woods’ office, the casual spectator will find that it is here where Woods pays tribute to the present and future of Horned Frogs purple while remembering his glory days in Lexington, Ky. A picture of Woods with the three other seniors from the 1991-92 Kentucky team, coined “The Unforgettables” by college basketball circles everywhere, as well as then-Kentucky head coach Rick Pitino sits in his office.

Woods said these men, not one game 15 years ago, shaped his life, and helped make him into the man he is today.

“It’s OK to lose, but if you can look in the mirror and say ‘I gave it everything I had,’ then that’s the best thing you can ask of yourself,” Woods said.

So as sports outlets nationwide put the Laettner clip on repeat today, fans might see a player in a blue jersey in the bottom, right-hand corner of the television screen fall to the floor in defeat. What they do not show is a man who is much more than one game. After today, he can go back to living his life as director of basketball operations.

But that’s what anniversaries are for: to remember the past to better one’s self for the future.