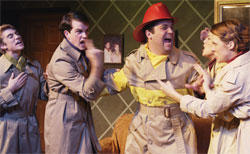 TCU Theatre’s sold-out presentations of “The Bald Soprano,” by Eugene Ionesco, began Thursday and will run until Saturday night.”The show is about people letting their lives become empty,” director Kevin Long said. “However, it is comedy, so it’s not heavy-handed or trying to preach. It is about laughing at ourselves.”

“The show was written to reflect the pointlessness in English society. As you can tell through the show, almost everything that is done all the way down to the dialogue is pointless,” Zielke said.

“The idea behind a show like this is that the students get to run the entire production,” Zielke said. “We get to make all of the shots, good or bad. Now granted they are usually good because we have had some good training, and the faculty would not put someone in the position of not having the knowledge of how to do something like this.”

The remaining shows, Friday at 5:30 p.m. and Saturday at 2:30 p.m. and 7:30 p.m. are sold out, which Long attributes to the small space of the TCU Studio Theatre located in the Walsh Center for Performing Arts.

“It is frustrating,” Long said. “Because the theater is small, and the run of the show is so short, not many people get a chance to see it. I keep wishing we would do a normal run of six performances instead of four, but this is the way it’s always been done, and it is all up to the faculty.”

Zielke does not believe TCU theater students, who are required to see TCU Theatre productions, eat up most of the tickets before non-theatre TCU students can obtain them.

Zielke said that if the productions were moved to larger spaces, the students would have to rely more on the faculty for help.

“If we were to make this show a larger one, on a main stage, the size alone would require us to need some help from the faculty since we are students and have class,” Zielke said. “I have no problem working on a production like this since we do have much more freedom, and I would not like to change that a bit. So no, there is not even a thought to making this a large production, and most of the students and faculty agree.”

The TCU theater box office will be taking names for a waiting list for “The Bald Soprano” 45 minutes before show time incase of no-shows.

TCU Theatre’s next production will be “You Can’t Take It With You.” The box office opens Nov. 7 and the show will run from Nov. 15 to Nov. 20.