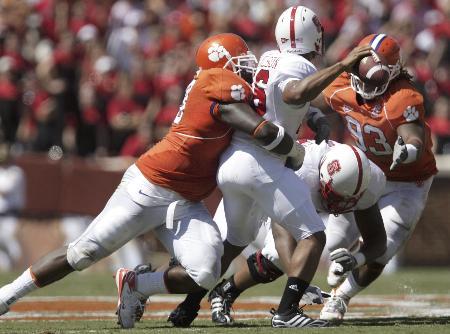 If some Clemson University linemen are sick to their stomachs this week, it might not be for fear of the Frogs, who play at Clemson on Saturday afternoon.

Six Clemson Tiger football players missed practice Monday because they were sick with the flu, according to a Clemson practice brief.

According to the brief, offensive linemen Mason Cloy, Jamarcus Grant, Phillip Price, Kasey Nobles and Kenneth Page sat on the bench wearing masks and defensive tackle Jarvis Jenkins stayed at home. Cloy and Jenkins started in all three games for the Tigers so far this season.

“He didn’t even make it to the stadium because he had the flu,” Hennessy said.

Clemson officials are not sure if the cases are the H1N1 virus, also known as swine flu, yet, Hennessy said.

Angela Nixon, public information director for student affairs and advancement at Clemson, said that since the beginning of the semester, about 250 cases of the flu have been reported at the university, but the majority of those have been recorded recently. The university asked students to isolate themselves and not come to the health center on campus if they have mild flu symptoms, Nixon said.

The Clemson health center can no longer provide an accurate number of flu cases at the university because staff are not treating them at the health center, she said.

TCU treated 185 students for flu-like symptoms earlier in the semester, according to a campuswide e-mail sent by Don Mills, vice chancellor for student affairs, on Sept. 2.