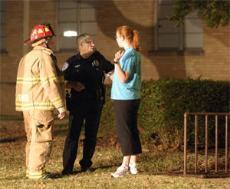 Colby Hall residents were evacuated and the Fort Worth Fire Department was called Sunday evening after a resident assistant spotted smoke on the third floor of the building.Sarah Bachman, a sophomore nursing major and Colby RA, said she called TCU Police and the Colby front desk when she noticed the smoke.

The RA on duty at the front desk then pulled the fire alarm and everyone in the building was evacuated.

Missy Nauman, the Colby hall director, said the smoke alarms did not go off automatically because the smoke was not thick, dark or hot enough. There was no fire in the building, she said.

The white smoke was caused by a hot motor inside an air conditioner, said Tim Johns, a Fort Worth Fire Department battalion chief. He said the smoke “smelled like real strong burnt toast.”

He said the department sent five engines and two ladder trucks because of the size of the residence hall. Large buildings receive a “stepped-up response,” he said.

Annalise Madsen, a freshman biology major, lives on the third floor of Colby.

“I went out in the hall and it was smoky and hazy,” Madsen said. “The RA kept running around, trying to find out if it was a fire in someone’s room. She couldn’t find it, so we had to evacuate.”

Johns said the department brought in fans to blow the smoke away while students waited outside for about an hour. No injuries were reported, he said.