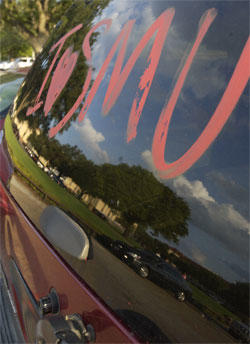 As many as 40 cars parked overnight Friday in the heart of campus bore shoe polish graffiti Saturday morning that suggests an SMU prank, and TCU Police officers said they saw no one suspicious entering the parking lot.The vehicles, which were parked in the Quad Lotadjacent to Frog Fountain, had messages saying, “I ‘heart’ SMU.” Windows at the University Recreation Center were also vandalized, TCU Police said.

He said he saw as many as 100 cars with red writing.

Skiff Advertising Manager Tiffany Cox called TCU Police at 10:15 a.m. to report the prank on her car, parked in the Quad Lot.

Cox, a senior advertising/public relations major, said she talked to a dispatcher about the act, but did not file a report.

Assistant TCU Police Chief J.C. Williams said there are no surveillance cameras in the Quad Lot, which is located in the middle of campus.

“The cameras really don’t cover that,” Williams said. “(They) are on the Freshman Lot and Coliseum Lot.”

He said TCU Police plan to review cameras inside the Rec Center to see if that attack was caught on video.

Senior mathematics major Emily Henry also saw the cars as she left for the football game. She said several cars had graffiti on their windows.

Williams said TCU Police did not receive “a series of reports” from students about the graffiti.

“An officer noticed the shoe polish, but we didn’t have a student’s name or vehicle,” Williams said.

“The officers did not see anyone around the vehicle,” Williams said. “I suspect it was probably a group.”

TCU Police Sgt. Kelly Ham refused to comment, but said he is investigating the prank.

Williams said many students probably washed off the shoe polish and did not file a report with police. He said that if students wanted to file reports after the incident, they can contact TCU Police.