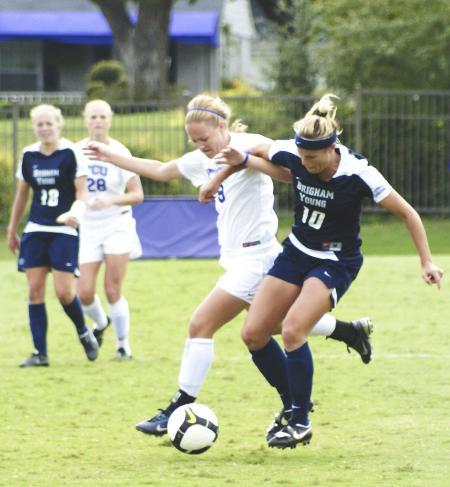 TCU soccer kicked off the BYU challenge Thursday with a 1-0 loss to the Cougars at Garvey-Rosenthal Soccer Stadium.

BYU scored the lone goal of the match in the 35th minute of the second half. BYU freshman forward Lauren Anderson played the ball through the TCU defense to a breaking Kassidy Christensen on the left side. The Cougar sophomore forward played the ball low and away from charging TCU sophomore goalkeeper Kelsey Walters and into the net.

“We made a few mistakes here and there,” redshirt freshman defender Katie Taylor said. “They slipped in behind, played it through and got it behind us.”

BYU scored the game-winner with only 10 players on the field. Junior defender Kelsea Kakadelas was given an immediate red card after a hard tackle on TCU sophomore Jackie Torda with 28 minutes remaining the the match. Torda also received a yellow card.

Both BYU and TCU had many chances throughout the course of the game. BYU freshman forward Jennie Marshall was attacking the goal at all angles in the last minutes of the first half missing most her shots high of the goal.

TCU created chances but could not finish the opportunities. Freshman Jordan Calhoun tried to reignite the TCU offense after the Cougar score, taking the ball off the kickoff deep into the box by herself, only to be stopped before she could get a shot off by a sliding BYU defender.

Junior forward Lizzy Karoly also had a chance off a cross in the middle of the box at the end of the game. The crossing pass found Karoly’s head in front of BYU keeper McKinzie Olson, chipped straight up into the air and would have fallen in behind Olsen if she had not dived backwards to punch the ball over the crossbar.

“It’s so frustrating,” Karoly said. “We had chances but couldn’t find the back of the net.”

Torda’s physical play drew several penalties near the box and created a few chances for her that just could not find the goal.

“It’s the worst feeling when you see your shot sail over the goal, or right by it, or the keeper just gets a touch on it,” Torda said. “It’s unfortunate, but you’ve got to keep shooting and don’t get your head down. You’re never going to score unless you shoot, so keep shooting.”

Head coach Dan Abdalla said he thought both teams played like they were playing for the championship.

He said TCU needs to work on using the widths of the field to spread out play and not force the ball up the middle. In a game that was determined by a bounce BYU’s way, he liked aspects of TCU’s play.

“I thought our defensive work all over the field was good,” Abdalla said. “I thought our ability to maintain the tempo of the game to what we wanted was very good.”