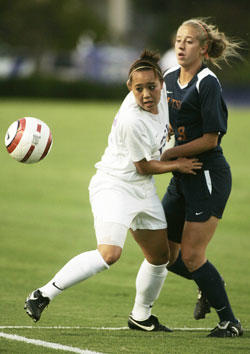 The two game scoring drought for the Horned Frogs soccer team came to a close Saturday following a 3-0 shutout victory over the UTSA Roadrunners. The win brought the team even in the standings with a 5-5 record on the season.The TCU offense came alive Saturday night at Garvey-Rosenthal Soccer Stadium Saturday night as freshman striker Lizzy Karoly netted two goals and had an assist, and freshman goalkeeper Kelsey Vross earned a shutout in her first career home start.

“I was really excited, I had been waiting the whole season for the thrill of a night game,” Vross said.

During the first half of the match, TCU exuded their dominance by keeping the ball in the San Antonio half of the field, but were only able to finish one goal. The goal came in the 24th minute of play on a pass from freshman midfielder Michelle Nguyen to Karoly. Karoly found space from eight yards out and unloaded on a shot into the upper right hand corner of the net.

With ten seconds remaining in the half TCU had a chance to extend their lead on a penalty kick by Karoly. However, her shot was denied by a diving save from UTSA’s freshman keeper Rachel Francis.

“I was frustrated after the penalty kick, becuase I had been making all those shots in practice to the same corner this week,” Karoly said, “I’m glad to have gotten the other goal to make up for it.”

The second half had TCU preserving their 1-0 lead under Vross’s leadership in the backline.

“I was keeping the back organized to they (UTSA) couldn’t shoot,” Vross said.

With just under 12 minutes left to play, Karoly added on an insurance goal for TCU.

Karoly dribbled her way through a swarm of Roadrunner defenders and managed to sneak a shot past Francis.

“I was doing my best to get my body in from of them and to draw a foul, or at least get a shot off,” Karoly said.

Another minute later the Horned Frogs struck again, putting the finishing touches on the UTSA squad. Karoly this time gave an assist to senior forward Kelsey Glass in the 79th minute.

TCU’s 3-0 victory was their first home shutout of the season, and head coach Dan Abdalla said the team’s play was “spot on” during the match.

“Our offense challenged them and it lead to playing with more bite in the final third of the field,” Abdalla said.

Karoly’s two goals tie her for the team lead with four on the season and it ends her five game scoreless streak.

“Tonight felt great, because I haven’t had much luck with my shot’s lately,” Karoly said, “it was good to finally get a result.