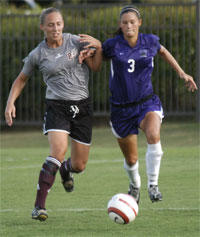 The TCU soccer team is going on the road for the first time this season to play the SMU Mustangs.”It’s time to get on the road and see some different scenery,” said head coach Dan Abdalla.

The Horned Frogs and the Mustangs tied 2-2 in the spring, soon after Abdalla began coaching at TCU. Abdalla said the tie helped the team gain the confidence it needed to realize it can compete on the Mustangs’ level.

Karissa Hill, a junior midfielder , said she agrees that the tie in the spring boosted their confidence.

“I think we are going to go and surprise them,” Hill said. “I think we will win.”

Abdalla said the matchup is “pretty even.”

Having midfielders Lauren Pope and Moran Lavi fit enough to play a full game will help, Abdalla said. Abdalla said he is relying on them to have a big impact.

Angie Nickens, a junior forward, said SMU has a lot of speed. To counter this speed, Nickens said the Frogs will have to anticipate in order to play their style.

“Our team has a great chance of winning,” Nickens said.”We work as a team and read each other.”

Nickens is from Dallas and played high school soccer with some of the SMU players. This adds a personal component to her game, considering she will be playing directly against old teammates.

The Horned Frogs lost 4-0 to No. 6 Texas A&M Aggies on Sunday, but Abdalla said their confidence has improved this week.

“It’s never fun to lose, but it showed them they can play at that level,” Abdalla said.

Game time is set for 7 p.m. Friday in Dallas.