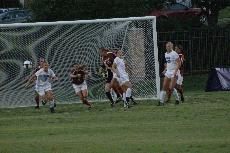 Despite a double-overtime loss to the now-No. 8 University of Texas on Friday, the Horned Frogs have been putting up top 25 numbers.

The Horned Frogs also rank 21st in scoring offense and shutout percentage. Despite the numbers, TCU fell one goal short Friday in front of 2,161 fans, the second largest crowd in the history of Garvey-Rosenthal Stadium.

The scoring began in the first half when Texas freshman Kylie Doniak took a shot from around 40 yards that initially hit the upright and bounced back. In an effort to block the top of the goal, Walters raised her arms in front of the post, but the ball ricocheted off her hand and rolled into the goal.

“I was making sure it was going over because I thought it was,” Walters said. “It hit the post and off the back of my hand and went in the goal. It was kind of frustrating because I had it covered, I just didn’t get there soon enough.”

TCU was held scoreless until four minutes into the second half, missing many chances. Sophomore forward Jackie Torda sent a ball into the box that found the foot of Calhoun for her eighth goal of the young season. Calhoun chipped the shot over Longhorn senior goalkeeper Dianna Pfenninger’s head and into the back of the net, tying the game at one.

“I think we started to go at them,” head coach Dan Abdalla said. “The players realized we needed to put them on the defensive.”

Texas had a goal disallowed with 21 minutes left in the second half on an offsides call right in front of the goal. TCU also staved off another opportunity when Walters came out to challenge a ball at the top of the box, deflecting the ball to another UT forward who fired a shot on goal. The TCU defense stopped the shot on the goal with a clearing kick out of the box.

In overtime, the Horned Frogs put the pressure on the Longhorn defense but were unable to finish on a handful of opportunities, with most shots sailing wide of the goal. “I was really proud of the character,” Abdalla said. “They have not in a single game thrown in the towel, wether we’re up in a game or down.”

Randy Diggs, an editor from www.soccerbuzz.com, a collegiate soccer Web site that publishes its own rankings, wrote in an e-mail that the Horned Frogs are having a successful season.

“We recognize TCU is playing great this season and had a stellar game against Top-10 Texas,” Diggs said. “Yet, the region is packed and there was very little movement in the region. Still, their performance should pay dividends as the season progresses and upsets continue to happen.”