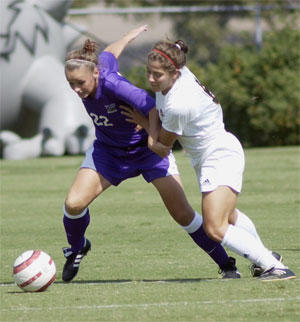 Despite the soccer team being swept on its final homestand of the year, head coach Dan Abdalla said he feels optimistic about the Horned Frogs’ chances to regroup and play well during the final stages of their schedule.TCU hits the road this weekend after tough home losses last weekend against Abdalla’s former team, the Nevada-Las Vegas Rebels and the San Diego State Aztecs.

“This weekend provides us with another test to learn more about two more teams in our new conference,” Abdalla said. “Once we get to the tournament, it’s anyone’s game.”

The Frogs are currently looking to snap a four-game losing streak, which spans all play in the new Mountain West Conference.

After playing against the statistically toughest teams in the conference, the Frogs now get to play a couple of teams below .500 when they hit the road for their final trip of the year.

In search of the elusive first conference victory, TCU plays Air Force and Wyoming this weekend.

Air Force has a record of 4-10-1 heading into play this weekend.

“We should play well against the Air Force,” Kaldheim said. “We have about the same record, so if we play organized, we should come home with two wins.”

Wyoming provides a little stiffer competition with another mediocre record of 5-6-3 going into this weekend’s play.

Assistant coach Dewi Hardman said he believes the team will be fine with a few more days of practice.

At 5-8 for the season, the Frogs are nearing the point of playing must-win games in order to keep their playoff hopes alive.

Junior midfielder Lauren Pope said this weekend could decide their fate down the road.

“We hope to connect with each other and play well, get some goals and give ourselves chances to compete,” Pope said. “We’re depending on this weekend, so we just need to play like we know how in order to win.”

With only three games left on the calender, and tournament seeds still at stake, TCU needs to win every game in order to finish at .500 for the season and keep its postseason hopes alive.

After its games this weekend, the team travels to New Mexico the following Saturday to take on the Lobos in its final game of the regular season.

The postseason tournament will begin the first week of November in Las Vegas.