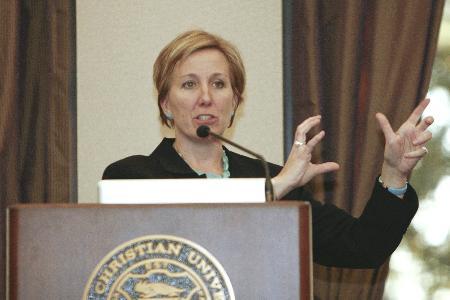 The women’s studies program guest speaker Monica Casper began her speech by warning her audience of 40 that she would mention the word “breast” at least 15 times Wednesday night during a presentation at the Kelly Alumni Center.

Casper said she is a feminist sociologist, a bioethicist, a professor, an author and, most importantly, a mother.

In her speech, “Body Politics: Private Tales of a Public Feminist,” she jokingly said that her family, and her mother especially, blames her feminist interests on a series of concussions when she was younger.

What supposedly started as a concussion has amounted into a great deal of professional work which revolves especially around women and girls, Casper said.

Casper talked about her writings, ranging from subjects dealing with infant mortality to toxins in breast milk, and placed them into one theme: body politics. She said she crosses her research with other disciplines, such as anthropology, environmentalism, science, sociology and any other subject presented. She said she uses what she refers to as a “feminist lens” in order to view a topic with a feminist approach.

Casper said she focuses on bodies because in many cases, certain classes, races and body parts are overlooked or missing from procedures, studies and research projects, hence the title of her latest publication, “Missing Bodies.”

The speaker next read an anecdote titled “The Edible Parts,” which recalled her tales of breastfeeding. She said Americans are likely to turn their heads at a woman breastfeeding, perhaps because of the way a woman’s body is so often portrayed as a sex object. She admits that she, too, was reluctant to breastfeed at first, but then gave in to her crying newborn.

While reading from her text, Casper graphically depicted her daughter drinking milk from her breast and all the emotional and physical feelings that came with it. She described the trouble of having a new set of enormous breasts and having to take special care of these much like her new child: with tenderness and patience, especially when they uncontrollably lactate, whether it be on a trip to Las Vegas or at lunch with a colleague.

Casper said that despite the troubles that come along with breastfeeding – just one small aspect in the life of a woman – the rewards were always greater.

“With (my daughters) cradled against me, I could close my eyes and be anywhere in time, linked to the millions of women across history and geography who similarly nourished their offspring,” Casper said. “I felt, for the first time in my life, like a member of a species, a product not just of society and culture but also of natural history, genetics and evolution.”

Karen Steele, the director of the women’s studies program, said she hopes that Casper’s speech will make students interested in subjects such as justice and sustainability realize that feminism is all part of it.

Amie Lewis, an AmeriCorps Volunteer in Service to America, said she liked how Casper presented herself in a nonstereotypical feminist way, by proving that women are not above men, but recognized individuals.

Casper said she wanted to portray herself as a constant feminist, even in everyday-life situations.

“I’m not just a feminist sociologist,” Casper said. “I wanted to show the perspective of a feminist from feeding my daughters to my professional work.”