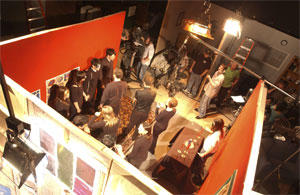 As a crew of students rushed around the set during the first day of filming their own soap opera, a former Hollywood script writer and now a professor, Richard Allen, sat in the back row of the production room and observed in silence.He says he doesn’t like to interrupt, even if he sees a glaring error. He thinks making mistakes is what it’s all about.

“He is allowing us to learn,” said Anna Leigh Simmons, a senior radio-TV-film major and the executive producer of the soap opera. “He lets an hour go by and then can say, ‘Oh, tweak it this way.'”

That way, she said, what has already been filmed is never ruined. He only enhances it.

The love of teaching

Allen has been a part of the RTVF department for 13 years. And while he spent the earlier years of his career writing for shows such as “Days of Our Lives” and “As the World Turns” and has won two Emmy Awards, he said teaching is definitely a more rewarding experience. And out of all his awards, the one he is most proud of is TCU’s best mentor award that he received in 2001.

Allen said he first considered teaching as a career only to have a backup, just in case writing did not work out. But at some point in graduate school, he realized that what he thought would be the fallback was actually his first choice.

In fact, he began writing for soap operas to get experience and build his resume for a teaching job. The Emmys were just a bonus.

But after years of writing for some of the biggest soap operas on television, he said, it was time for a change.

One of the reasons, Allen said, he did not enjoy working in Hollywood was because of the pressure that was put on him to get scripts written quickly.

“It’s very assembly-line,” Allen said. “You think you get to be creative – but there is no room for it.”

So Allen took the first and only job offer he got and moved to Fort Worth.

Even though he no longer had to produce one script a week, he found other ways to keep himself busy at TCU. Besides teaching classes and being the chairman of the department, Allen has been helping students create their own productions for years. “Southern Comforts,” the soap opera the students are filming this semester, is only the most recent in a series of projects Allen’s students have created in the last few years. And he said he hopes to keep up the tradition.

Although Allen left the big-name actors and shows in Hollywood, he still admitted to being nervous before the first day of filming of “Southern Comforts.”

“My students say I’m more nervous than they are,” he said. “Part of it is nervous energy. If I didn’t have it, I would think there’s something wrong with me.”

Simmons said she only takes it as a compliment.

“He anticipates. Not all teachers anticipate a great paper … but (Allen) anticipates something really good and so he is nervous to see if it is going to be good.”

“Southern Comforts” is a project that has been in the making since last year, and one of Allen’s classes was in charge of creating the plotlines and writing the scripts. And while this is precisely what Allen did in Hollywood, here he once again showed that he wants students to be in charge.

Simmons said this is just another way Allen encourages students to develop.

“He really just listens,” she said. “He listens to what you have to say and then he will take what you think and then make it better. He doesn’t just give you his own ideas – he works with what you think, your ideas.”

Renee Godelia, a TCU alumna who now works for “Days of Our Lives,” said Allen treats his students as professionals and wants them to grow not only as students, but as people.

“I kind of thought of us as co-workers,” Godelia said.

Godelia said that it is important for Allen to see his students succeed in life as well as school, so he does everything he can to help them get internships or jobs after graduation. She said she got her current job with Allen’s help.

Godelia said that when she was part of a soap opera production in 2000, Allen was just like he is today.

“He teaches us the skills but then sits back and lets us do it,” she said.

“He teaches right on your level,” she said. “He talks to you as if you are a peer and that he just happens to have Emmys. You wouldn’t have known the difference.”

“Despite the fact that he’s head of the department and a two-time Emmy winner, he’s still one of the most accessible and down-to-earth professors I’ve ever had,” Cire said.

“He uses examples, like in the films he chooses, that tend to open your eyes to things that you wouldn’t notice unless you had been working as closely in the business, for as long as he has.” Cire said.

But besides being known for his writing and teaching skills, Allen was also honored in 2001 by Jewsweek.com, which named him the 46th most important Jew in America. And although he said he knew there were only four people below him, he said the award was quite a surprise.

“I’m not even the most influential Jew in my house,” he joked.

Allen said one of the reasons he was selected to be on the most influential Jews of America list is because he is an observing Jew and did not attend the Emmy presentation to pick up his own award because it was on Shabbat.

He said religion plays a significant role in his family’s life. It is especially important for his wife, he said, who wants to study to become a synagogue service leader. He thinks his three children will also make religion a part of their lives as they grow older, even though he joked that his young daughter is a little “rebellious.”

As far as his plans for the future go, Allen does not plan on leaving TCU any time soon. He said his dream would be to retire in New York City, his hometown.

“I’d like to see a Broadway show every night,” he said. “But professors really don’t get paid enough to do that.