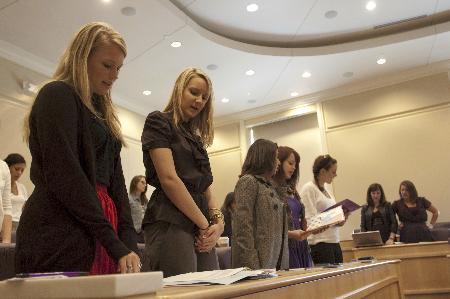 Lindsay Ray, president of the governing council, said sorority members will wear the pins, or badges, along with their formal attire, every first Wednesday of the month to the Panhellenic Council meetings.

“We just thought it would be a great way to promote the Greek community in a positive fashion to show all the great things that we do,” Ray said.

Natalie Swinney, president of the Deta Delta Delta sorority, said the pins are not large enough to reveal sorority affiliation, but they show overall Greek unity.

The pin-wearing idea came after the first week in September, but council members wanted to begin the tradition without missing a month, so they wore their pins the second Wednesday of September, Ray said. Swinney said members should have more opportunities to wear their pledge or chapter pins.

After speaking with a sorority adviser, she presented the idea at the presidents’ meeting, Swinney said. The adviser liked the idea of dedicating a day to wearing Greek pins because it shows support of each individual organization and Greek organizations in general, Swinney said.

“We thought that it was very supportive of the Greek community as a whole,” she said.

The pin-wearing is not mandatory, but sorority presidents encouraged their members to participate, Swinney said. She said she saw a positive turnout, which she said made the initiative a success.

The cost of pins varies among sororities and also depends on the level of custumization, Swinney said. She declined to say how much pins at her sorority cost.

Because of the variations of pins and sororities, an exact price range could not be determined.

Caressa Bateman, a freshman broadcast journalism major and Zeta Tau Alpha member, said the pins were similar to class rings. She said the opportunity to dress up drew positive attention.