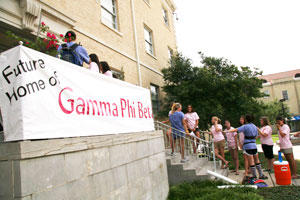 Jamie Shultz, collegiate leadership consultant for Gamma Phi, said the sorority participated in round one and then dropped out.

“Formal recruitment was like our coming-out party, a time to spread the love,” Shultz said. “It was insanely busy but it was a great experience. It gave us a chance to tell people who we’re all about.”

Kelsey Lemm, coordinator of fraternity and sorority life and Panhellenic adviser, said even though Gamma Phi didn’t complete formal recruitment it was good for them to take part in it.

“The other sororities are really supportive of Gamma Phi,” Lemm said. “They let Gamma Phi representatives sit in on their mock recruitment to see how recruitment functions.”

Rho Gamma Alexandra Wallis said that throughout formal recruitment women were informed about the process of recruitment, should they want to become a Gamma Phi.

James Parker, assistant dean of Campus Life, said if the women who went through formal recruitment wanted to become a Gamma Phi, they would have had to forgo signing a contract at the end of round four of rush.

The contract is called the Membership Recruitment Acceptance Binding Agreement Card, Lemm said. The MRABA is a card that binds woman to receive a bid from the houses she visited in round four, Lemm said. If she chooses not to accept the bid that she receives on bid day, she cannot join another Panhellenic sorority for a calendar year, Lemm said.

On the first day of recruitment, Gamma Phi hosted 12 groups of women for 20 minutes each in its new chapter room. The women got to hear alumnae talk about their experiences with Gamma Phi, Shultz said.

“Our atmosphere was upbeat, even though our house is still a work in progress,” Shultz said. “We were just really excited to show off what we had.”

There will be four rounds, just like formal recruitment, and a bid day at the end of recruitment with a planned sisterhood event, Lemm said.

Once recruitment is over and bids are handed out, Gamma Phi will be a fully-functioning sorority, Shultz said.

Shultz said Gamma Phi will not cut a prospective pledge because of her year in college.

“Our hope is that with 11 Panhellenic members, all the girls (who go through recruitment) will find a home in the Greek community,” Parker said.