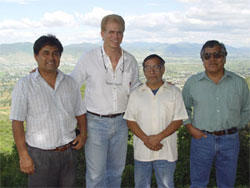 He has traveled foreign lands, learned foreign languages and witnessed what most people thought was ancient history. Now Spanish professor Donald Frischmann unveils what he calls the truths behind the indigenous Mexican cultures, which he says are still very much alive today.Frischmann’s anthology, “Words of the True Peoples,” is being published in a three-volume format covering poetry, prose and theater of contemporary Mexican indigenous writers. The multilingual books contain works by 33 authors who represent 13 different Mexican indigenous, or native, languages.

“This project represents years of study, research and meeting with authors,” said Bonnie Frederick, chairwoman of the Spanish department. “It is a culmination of studying and learning about Mexican indigenous people and literature.”

Frederick is just one of the many supporters of Frischmann’s work, which is gaining attention as a “groundbreaking” accomplishment.

Frischmann’s interest in Mexico began during his summer trips to Mexico City in high school.

“I was awestruck by the pyramids at Teotihuacan, the treasures that were contained in the museums, and the antiquity of the culture,” Frischmann said. “At that point, I had no idea there were still indigenous languages.”

Frischmann continued pursuing his interest with the research work he did for his master’s degree at the Universidad de las Americas in Puebla, Mexico. There, he researched the Nahuatl people.

“That was the first time I was in contact with Mexicans who didn’t speak Spanish,” Frischmann said.

Frischmann said writers began a movement about 25 years ago to move away from the oral focus of native languages. He said indigenous writers bound together to form an association that created the beginning of new writings in Mexican indigenous languages.

Mexico’s 10 million indigenous people started to widely emerge, but this did not mark the first time these cultures had a written language, Frederick said.

“There was a very active literary scene before the Spanish conquest,” Frederick said. “Culturally, their literary tradition was interrupted, but interrupted is not the same as vanished.”

Frischmann said the written language began with cave paintings, evolving into the first texts, known as glyphs. He said the Aztecs and Mayans had books made from paper or deerskin documenting their scientific, religious and astrological knowledge.

“The Spaniards tried to destroy those books because they thought they were ‘devil’ works,” Frischmann said. “Their written works were nearly wiped out.”

Since then, Frischmann said, most of the indigenous people were not able to read or write and relied solely on the spoken language; if they heard something being read, they memorized it.

“What we’ve published are the pioneers,” Frischmann said. “They are defenders of their culture and language.”

Frischmann said the movement brought a form of bilingualism to schools. He said the indigenous people maintained their native language, but used it primarily as a stepping stone to learn Spanish.

“There’s a tremendous prejudice against traditional indigenous customs and people, so many are not interested in maintaining their native indigenous language,” Frischmann said. “Their Spanish is becoming more prominent, but the indigenous writers want to halt this reversal of the loss of their native language.”

Frischmann said the 500th anniversary of Columbus’ voyage to the New World in 1992 stirred up a lot of controversy over indigenous suppression and the people began to raise their voices.

“Things really began to take off in 1990 as they prepared for the anniversary year,” Frischmann said. “The indigenous people did not think there was anything to celebrate because they were impoverished, discriminated against, and lacked schools, health care and jobs.”

Lee Daniel, a Spanish professor, said that since then, the indigenous people began to prove that their culture was not dead and forgotten.

“This is to indicate a new phenomenon, that is that the indigenous language has never gone away,” Daniel said. “It is only today that the contemporary indigenous writers are taking their rightful place alongside other contemporary Mexican writers.”

During Frischmann’s time in Mexico researching for a literary anthology and studying Mexican theater, he met his co-author, Carlos Montemayor.

Montemayor is a Mexican writer and linguist, proficient in more than 20 languages. Frischmann said he is Mexico’s primary promoter of contemporary indigenous-language writers, and worked hand-in-hand with Frischmann in this anthology.

Frischmann funded the project with a TCU grant, a Fulbright award, and a National Endowment for the Humanities Fellowship.

The International Bank of Commerce financed two phototographic tours for Jackson and Frischmann.

Frischmann said he worked out of Mexico City, and that he made some of his best memories traveling the country taking pictures of the indigenous writers.

“We drove over 4,000 miles in three weeks,” Frischmann said. “We traveled all parts of Mexico except the northern desert.”

Jackson said he was pleased to work with Frischmann, whom he met while developing his own project to capture the essence of the Mexican festival.

“I will always remember the camaraderie that existed between Dr. Frischmann and the writers, the valuable insight that he provided and the great meals that we shared,” Jackson said. “He has proven to be a true and loyal friend that I appreciate and admire.”

Jackson said he hoped the books would expand the appreciation of what he calls the noble peoples and their cultures.

“Aside from being known as the authority on indigenous Mexican theater, the ‘Words of the True Peoples’ anthology is a testimony to Frischmann’s commitment,” Jackson said.

“What struck me was a rather large crowd that attended,” Daniel said. “I think that attests to the importance of the book itself.”

Daniel was also a presenter at a book release held in Fort Worth. As part of the release, one of the indigenous writers read her work published in Frischmann’s book.

Frederick said the atmosphere of that release was astounding.

“I was covered in goose bumps; it just took my breath away,” Frederick said. “People think we deal with dead history, dead people, dead ideas, and that’s often a mistake. Dr. Frischmann’s work is proof that TCU researchers are dedicated to life and lively ideas.”

Frischmann said his work has been rewarding in many ways.

“I’m proud because I’ve delved into an area of literature that very few people have been interested in,” Frischmann said. “They’re interested in great famous Spanish authors; we’re dealing with great writers, but very humble people.”

Daniel praised the collaborated efforts of all those involved in the anthology.

“This is a welcome addition to the study of Mexican literature and should be commended as a pioneering and landmark achievement,” Daniel said.

Frischmann is now looking toward producing a television documentary for binational broadcast, as well as publishing a fourth volume of the anthology. He will also be offering a series of related programs at the Latino Cultural Center in Dallas and at the Dallas Museum of Art.