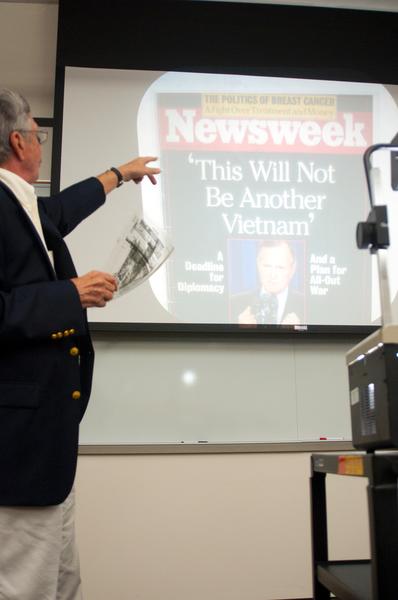 Vietnam was the most divisive war in American history with the exception of the Civil War, George C. Herring said in his speech at the university on Thursday. Vietnam is also the war that never seems to go away, he said.

George C. Herring answered the question as to why the Vietnam War still troubles the United States today.

One reason Herring said was the sheer duration of the war. Beginning in 1950 and ending in 1975, the Vietnam War was the longest in U.S. history.

“We Americans by nature are an impatient people,” Herring said. “We want results, we want them quickly.”

In the late “60s, Vietnam became not just a country or a war, but some people also saw it as a metaphor for what the U.S. was or should be, Herring said.

“Others saw the war as essentially a betrayal of American ideals,” he said.

He gave an array of other examples from each side of the divisive subject matter.

From debates in the “80s and “90s about intervention in other countries to decisions President Obama recently made in December 2009, the frame of reference was likely to be Vietnam, Herring said.

“When Barack Obama was making his major decision…to escalate the war in Iraq, the Vietnam analogy, the Vietnam comparisons, were very much apart of the framework,” Herring said.

Such decisions have proven the Vietnam War’s continuous relevance in American issues and politics today.

Herring is a Professor Emeritus and Former Alumni Professor of history at the University of Kentucky. Herring’s most recent endeavor is a piece called “From Colony to Superpower: U.S. Foreign Relations Since 1776,” currently available for purchase.