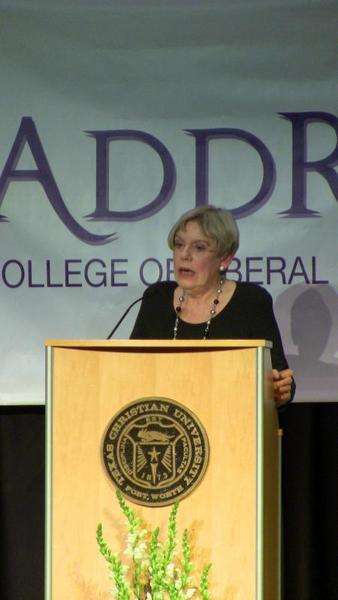 Karen Armstrong doesn’t place the blame of 9/11 on policies, individuals or even hate of the western world. According to Armstrong, a lack of compassion for the outside world brought upon the events of that day, and many of the world’s struggles.

“If you deny the pain of the world, that pain will come to you in a terrible, distorted form,” Armstrong said Tuesday night in the Brown-Lupton University Union Ballroom.

It was one of numerous pleas from Armstrong stressing the importance of compassion worldwide, especially with advances in global communication. She delivered a 50-minute address on religion’s place in our world titled, “Religion in an Age of Terror: Perils and Possibilities.”

“Unless there is a full recognition of the ubiquity of pain, we cannot, in the Buddhist sense, begin our religious quest,” Armstrong said. “We can not practice the compassion that is essential for enlightenment, for the experience of what we call ‘God,’ for Nirvana, Brahma or Dao unless we recognize that pain that lies at the heart of human life.”

It was a strong stand in an address filled with many, and was devoid of humor or crowd interaction. Armstrong’s tone was mostly intense, stressing the importance of making worldwide change.

Last year Armstrong won an award that she plans to use to make that change.

A British author and a former Catholic nun, Armstrong is known for her writings on comparative religion. More recently, Armstrong was awarded one of three 2008 TED Prizes, a $100,000 award provided to grant a “One Wish to Change the World,” according to the Technology, Entertainment, Design Web site.

The wish was revealed at the TED Conference to be a “Charter of Compassion.” Armstrong brought Christian, Muslim and Jewish leaders together to create the charter, which would apply shared moral priorities to foster greater global understanding, much like she stressed in her speech. The charter will be unveiled Nov. 12.

Armstrong told a packed crowd that this generation is at a crossroads.

“It seems to me that we can either select those aspects of our intellectual, moral and spiritual traditions that speak of hatred, division, contempt and exclusiveness or we can select those that speak of compassion and make them work,” Armstrong said.

She said the Charter of Compassion will reflect those ideas, and provide a ground work of ideas from all religious traditions with how to see the inherit humanity in all peoples.

Armstrong has written 20 books according to religion department chair David Grant, and is currently on a book tour for her newest work, “The Case for God.” In his introduction, Grant revealed that the book will appear at number 10 on The New York Times nonfiction bestseller list in its first week of publication.

In it, Armstrong argues for a new way to look at Christianity that is closer to mysticism and draws the line of major shift in religious thought at the times of Isaac Newton and William Paley. She argued that the “natural theology” of Newton and Paley created a scientific warrant for belief in a creator God – a major misstep in her eyes.

Armstrong argues that religion has been trying to find its grounds as a scientific study ever since, and was thrown for a loop with Darwin’s theory of evolution.

As the address closed, Armstrong made a call for the audience to show compassion to those of other beliefs.

“It is when things are hard that we understand the depth and importance of our religious traditions,” Armstrong said. “Compassion is a challenge. It demands a constant intellectual and moral effort to go beyond selfishness. But if we apply it, as the world religions tell us, we get enhanced perception of mind and body and heart. And we can save our troubled world.”