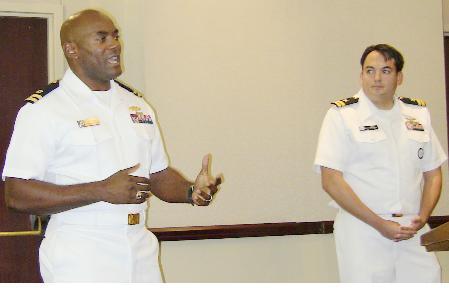 Members of the United States Marine Corps may wear the same uniform, but the Corps itself has never embraced diversity so fully. members of the Navy said at a luncheon Tuesday at the Kelly Alumni Center.

Keynote speaker Robert Schneller Jr., who received a Ph.D. in military history from Duke University, is a historian for the Contemporary History Branch of the Naval Historical Center. He provided the audience with a brief history of diversity policies in the military, focusing on their impact in the Navy.

Schneller said dozens of books have been published since the 1970s about blacks in the military, but there has yet to be a comprehensive scholarly book published on racial, ethnic and gender diversity policies and practices in the military. The Navy, he said, recently began a project to do just that.

He said he first became interested in studying naval diversity policies after speaking to Wesley Brown, the first black man to graduate from the United States Naval Academy in 1949. Schneller, who has published eight books, said that throughout his research he has been interested to see how much racial and gender relations within the military have changed.

“Name calling among midshipmen in the ’60s was common, but by the ’90s no one would dare utter a racial epithet,” Schneller said. “The Navy evolved from a racist institution to one that embraces diversity.”

Lt. Gary Nunn, who joined the U.S. Marine Corps in 1990, said that he never had to experience the circumstances Schneller described. The military, he said, has given him many opportunities.

“The U.S. military is not like it used to be,” Nunn said. “I do what I do for the Navy for this country so that we can continue to live the way we do.”

Of racial relations outside the Navy, Nunn said the recent election has shown that Americans can break through barriers. He also said he hopes this will influence other areas of the world.

Lt. Carol Gibbins, an alumna, also said her experiences with the Navy have been positive. She now serves as a medical and nursing recruiter at Navy Recruiting District Dallas.

April Brown, assistant director of Inclusiveness and Intercultural Services, said IIS tries to offer a broad range of topics on diversity through its Monthly Cultural Lunches, which have been held every other month this semester. She said the topic of this particular luncheon was important to her.

“I was a Marine officer, and it’s really close to me because I know that the Marine Corps had very few African-American female officers at the time I entered the Marine Corps,” Brown said. “It was a unique journey to be sometimes the only person represented by gender and by race.”

Brown said the timing of the topic was also appropriate.

“At the time I wasn’t even really thinking about the election, but as the day got closer and the election got closer I began thinking, ‘Wow, this is pretty interesting that we were talking about topics of how the military was integrated and really how far it’s come, and then now we look at a presidential election and how far we’ve come as a country,'” Brown said. “I hope it impacts all of our society whether it’s corporate or the military or nonprofit or education. Our country seems to be very progressive now in maybe ways that it wasn’t 40 or 50 years ago.”

Lt. Joshua Rupert, who Brown said was instrumental in arranging for the speakers and having the Navy sponsor the luncheon, said it is important for the Navy to continue its efforts toward maintaining a diverse and accepting environment.

“It’s important to match the population,” Rupert said. “We’re trying to look like the rest of America.”