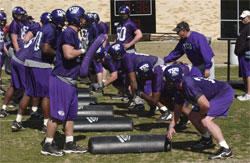 Do you find yourself wishing football season never had to end? While all good things must come to an end, people still struggling to shrug off football fever can get their gridiron fixes tonight. TCU football fans have their first opportunity to check out the 2007 team in the Purple and White game at 6 p.m.

“Even though we call it Purple and White for everybody outside, really, for us, it’s like a scrimmage,” head coach Gary Patterson said,

Patterson said the team will have a total of 44 practices: 15 in the spring and 29 in the fall before the season-opener versus the Baylor Bears on Sept. 1.

“What we’re going to try to accomplish is to find out who our top 65 players are,” Patterson said, “and (the scrimmage) helps us because there are more people in the stands. Some people play better in front of the lights, and you see some players that don’t play as well when people are around.”

Patterson said he is concentrating on forming a balanced team.

“Everybody has good first guys.” Patterson said. “When people get hurt, it’s how the second and third (string) guys play that makes a difference.”

Coming off another successful season, the team is focused on the future, and Patterson said he will only be satisfied with improvement.

The Frogs will follow up the opening game against Baylor with the daunting task of playing the Texas Longhorns in Austin, but Patterson showed no sign of concern.

“We have the kind of schedule we have this year because people want to see us in the matches on TV,” Patterson said, “so it’s time to go play.”

With the graduation of star athletes including quarterback Jeff Ballard, some nervousness could be expected, yet Patterson remains calm and unflinching, even optimistic.

“I’m excited because I started to see the intensity that I remember in last year’s football team today in the short bit when we scrimmaged,” Patterson said.

After the Purple and White game, Patterson said the team’s focus will be on finishing the semester strong in the classroom.

“Spring ball is a time of development,” Patterson said.

He said the team has worked on strength-building and learning plays but many of the qualities cannot be coached and, instead, must come from the team working together.

“We try to build chemistry, find out who our leaders are, who our go-to guys are, and then those guys will step up for us when it counts,” he said.

Others seem to share Patterson’s enthusiasm about this year’s team.

Frank Gardener, 81, who played tight end for TCU in the late 1940s to 1950, has watched nearly every Frog football game in the past 60 years.

From the practices he has watched this year, he has confidence this year’s team will be full of talent.

Mark Cohen, athletic media relations director, said he thinks this team will have a great opportunity for success. He said TCU should do well as long as they live up to the hype developed by the media.

“There’s always a buzz on campus, but it has extended to the community,” Cohen said, “There are a lot of people talking about TCU football, and that’s exactly what we want.