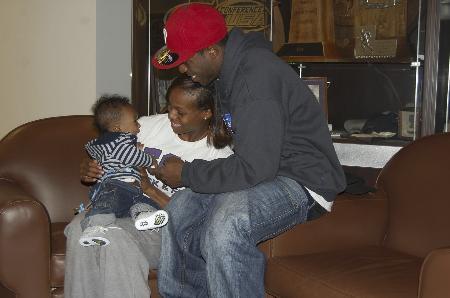 Kristal Juarez steps into the blocks.

The voice behind the microphone quiets the crowd.

Her nerves cause her body to shake and her muscles to coil.

Seconds pass. Waiting for the final shot seems like an eternity.

She never looks back; she only moves forward. Those people closest to her say her drive pushes her through any struggles – the fear of losing is motivation enough.

Her nerves fade, giving way to the energy that lifts her legs and pumps her arms around the first curve.

The finish, the end of one lap around the track, is her domain and her area of expertise. From up against the fence railing, just beyond the track, her family cheers. They never miss a chance to see her run.

She picks out a clear and distinct voice.

Juarez, a sophomore child development major and member of the track team, is fast on the track, but also is growing up fast to adjust to the new addition to her life.

Kristal Juarez is a 19-year-old mother.

The sounds of her life have changed from the loud cheers of the crowd to the cries, gasps and the goo-goo, ga-ga dialect of babies.

Moving back some months from that date, Juarez remembers a visit to her mother’s in Houston.

She said her mother was the first to mention that she might be pregnant. Her mother’s suspicions were confirmed about a week later.

Juarez struggled with idea of even becoming a mother because she feared disappointing others and facing their judgment.

She also worried about the state of her athletic scholarship when she had to break the news to her coach.

Providing her child with a healthy environment, being the perfect mother and balancing school rounded out her concerns.

Her worries were alleviated as her coach ensured her that she would not lose her scholarship and her family and friends were prepared to give her the support she need emotionally and financially.

Kerley said the pregnancy was easiest for him because most everything is planned and there are few unknowns. He said that now he and Juarez are always changing and adapting to their son’s needs.

Juarez and Kerley met their freshman year on the Sunday before school began in the old student center.

Despite having relationships with others, Juarez said that those relationships quickly didn’t seem to matter. She and Kerley became inseparable.

Kerley’s fingers are now tattooed with the letters of his son’s name. He held his hands together with confidence when asked what their plans were for the future.

But until they both graduate and can afford their “fantasy wedding,” he said that they can wait.

The couple – branded by sports – has gone from exchanging advice and critiques of each other’s performance on the field and track to discussing Dae’Shone.

Speed now dominates their lives – running to day care, rushing from class to class and sprinting at track and football practices.

“I live my days by the hours,” Juarez said.

Monday through Friday is non-stop for Juarez who juggles dropping off her son at day care in the mornings instead of sleeping in. Then she goes between classes, tutors and practice and it is back to caring for Dae’Shone at night.

There are few places to pencil in other activities as she might have done before.

The most difficult part of having a baby, Juarez said, is sleep.

Juarez also said that her return to track has changed. Bringing her body back to tip-top form has included some extra work – sticking to a more intense abdominal workout and practicing her breathing skills. But the biggest change was re-establishing her focus.

Since the seventh grade, when her grandfather first introduced her to track, Juarez has worked diligently to make a name for herself.

After trading in her set of pom-poms in the seventh grade for a pair of running shoes, she has cultivated – with her grandfather’s guidance – her passion for winning as well.

Losing strength and dealing with the changes in her body has forced Juarez to become patient with herself, which is difficult for someone whose fear is losing and letting those around her down.

Before the pregnancy, during track practice Juarez was able to stay in line with the group she ran sprints with – not now.

“I just want to be where everyone else is at and running with my group sometimes, and seeing myself in the back, that stuff hurts,” she responded in a soft and disappointed tone.

Balancing the roles of mother, student, teammate and girlfriend are not easy for Juarez, but track and family help her to maintain her focus.

Even her e-mail signature shows what is now important in her life: “I’m a mother on a mission, for myself and my child. Lord bless us.”