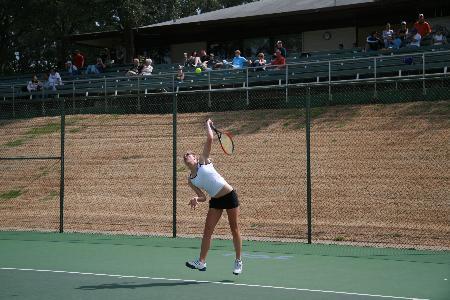 The undefeated No. 20TCU women’s tennis team enters the 2008 Mountain West Conference Tennis Championship as the No. 1 seed on its home courts.

The conference championships, which start today, are being held at the Friedman Tennis Center.

The Horned Frogs (18-4, 8-0) have played near perfect at home this season, entering with a 9-1 record on their own courts.

No. 2 junior Macall Harkins said she believes there is an advantage to competing on the same courts the team practices on.

“It’s nice to have our home fans come out and watch us play,” Harkins said.

The women also enter the tournament as regular-season MWC champions with a perfect 8-0 record.

Often dominating in its conference matches, the team swept half the field, going 7-0 in four of the wins.

The University of Nevada, Las Vegas came closest against the Horned Frogs, taking three of the six singles matches but falling in doubles, losing 4-3.

UNLV enters as the No. 3 seed and the squad that defeated TCU in the semifinals of last year’s conference tournament.

This year, UNLV will play No. 7 Colorado State University.

The Horned Frogs have made winning a habit over the past month, winning 11 straight games dating back to March 13.

The two lowest seeds, No. 9 Air Force and No. 8 University of Wyoming, will kick off the four-day tournament Wednesday. TCU, who has a first round bye, will play Wednesday’s winner in its first match Thursday.

The women’s tennis team is familiar with both possible opponents because it has played them in previous matches.

TCU is led by its No. 1 doubles pair Harkins and junior Anna Sydorska.

Harkins and Sydorska have an overall record of 13-5 and are ranked No. 16 in the nation.

The Horned Frogs also have their No. 1 singles player, sophomore Nina Munch-Soegaard, to rely on.

Munch-Soegaard stepped in to TCU’s No. 1 spot last year as a freshman, and said she feels the team is built well to compete.

“We are solid from the bottom to the top,” Munch-Soegaard said.

She said she has not thought much about her jump in national ranking to the No. 61 position.

“I had a good season and I played well,” said Munch-Soegaard, who has an overall 14-7 record this season.

The Horned Frogs will not make any changes to their practices in order to prepare for their unknown opponent, Harkins said.

There are nine women’s tennis teams participating in this year’s championship.