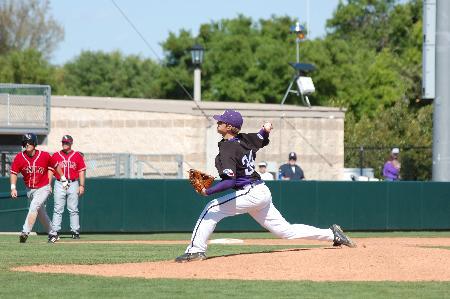 With nine straight wins, the Horned Frog baseball team will attempt to defend its streak against the University of Oklahoma in Lupton Stadium today.

In the Horned Frogs’ first contest against the Sooners in Norman, Okla., TCU was dropped 13-5. Pitcher Tyler Lockwood started the game for the Horned Frogs but was pulled after 2/3 inning, allowing five earned runs and recording a loss. Oklahoma rode a seven-run first inning en route to the win.

In the second game at Lupton Stadium TCU won 11-3, with Lockwood earning a win this time in three innings of scoreless relief.

Head coach Jim Schlossnagle said Oklahoma is a big game for the team but this is the most important part of the season from a conference standpoint.

Freshman Trent Appleby, who helped record a triple play in Sunday’s win over the University of Nevada, Las Vegas, said he expects a big crowd to show up to see them play the Sooners, but said the team does not focus on names.

“We don’t play the jersey, we just play the game,” Appleby said. “We don’t focus on who we’re playing but rather just doing our job.”

Freshman Jimmie Pharr said the Sooners will bring great pitching and the end result will probably be a really close game.

The Horned Frogs, who at the end of March dropped two of three games to the Runnin’ Rebels in their first series against the conference foe, reversed their fortunes this past weekend.

In the two games TCU lost to UNLV, the Rebels got the win in the ninth inning. This series featured two late inning-comeback wins for the Horned Frogs in games one and three.

TCU is currently in third place in the MWC with an equal conference record as second place University of New Mexico, but behind in the tie-breaker.

The nine-game winning streak is TCU’s longest since the 2006 season when it won 10 straight games before dropping its final two in the NCAA regional.