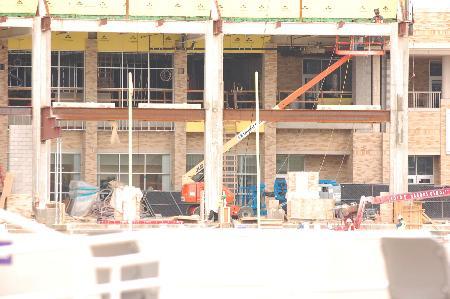 The reconstruction of the collapsed seating at the south end of Amon Carter Stadium will not cost TCU anything, a Physical Plant director said.

HKS Architects Inc., the Dallas-based design team will be paying for the reconstruction, said Harold Leeman, associate director for major projects at the Physical Plant.

In HKS’ original design, the seats were held up by a cantilever construction, which means it was only supported on one side, Leeman said. He said columns, which construction workers will begin working on next week, will replace it.

Leeman said TCU, the design team and the construction company all hired their own engineering firms to ensure that the new design was structurally sound.

Morrison said the stadium seating in the south end has been re-engineered to ensure it is both structurally sound and in keeping with the current architectural integrity of the stadium.

Morrison said the south end will be completed by Aug.1, a two-month delay from the original date.

Meanwhile, the stadium committee made its recommendations for the rest of the stadium to the Board of Trustees at their April meeting, Morrison said.

All ideas are in the concept stages, Morrison said, but he said the concept the committee recommends is one that would renovate the lower level of the bowl. Everything from the ground would be razed and reconstructed so that it would have elements of the stadium’s original design, Morrison said.

The committee has met 11 times over the last year to develop ideas for renovating the stadium, Morrison said. He said no action has been taken yet and the concepts are still running through various committees.

“We are not in a place to go public with definite plans,” Morrison said.

Morrison said the presented concepts are now running through various committees for approval. Any formal announcement by the Board of Trustees of stadium plans would be no earlier than next fall, he said.

He said any work done to the stadium would have to be done in phases.

“The goal would be not to interfere with football season,” Bailey said.