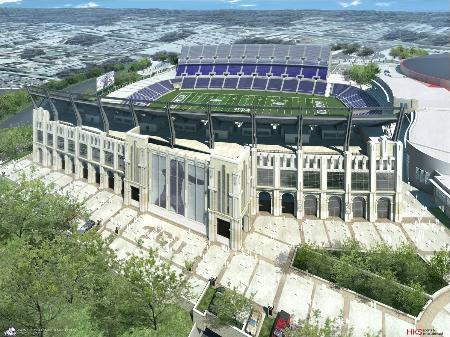 Many campus buildings have fallen victim to the university’s construction binge, and the necessity for another new, shiny crane may be on the horizon.

Ross Bailey, associate athletics director for operations, said the Dutch Meyer Athletic Complex and Abe Martin Academic Enhancement Center, located in the south end of Amon Carter Stadium, will serve as a model home to future renovations of the rest of the stadium, with construction slated for 2010.

Bailey emphasized that the project is still in the conceptual stage and that there is much work to be done before construction begins.

“To say that they are anywhere near final designs would be a misnomer,” Bailey said.

HKS will help to create presentation documents and a video to show prospective donors. HKS worked with the university on the South End Zone Complex, and it has had a hand on other major projects, such as the American Airlines Center and the Dallas Cowboys’ new stadium.

Right now, HKS is the primary company involved. Bailey said other architecture firms could contribute to the project, and construction and engineering firms will be added later.

“It’s amazing the number of people and trades and all that come together on a project like this, but no, we’re not that far down the road yet,” Bailey said.

The Amon G. Carter Foundation has donated $15 million toward the stadium renovation. The conceptual cost to renovate the west side of the stadium is in the neighborhood of $120 million, Bailey said.

“We’d like to put together a core of people that become the founder’s club,” Bailey said. “These six to eight founders become really the core group, from a donation standpoint, that place the impetus on getting the project going. We would then hope to fund the rest of the project through smaller donations, suite leases and club seats.”

Funding to build the South End Zone Complex came entirely from donations, which allows all revenue from the complex’s club seating and suites to go directly toward scholarships for the football team.

“Ideally, in a model, if you can somehow get it all funded, and if it works out the way we think it will work out, we’ve got a chance to self-fund the scholarships for the football team,” Bailey said. “That’s a big, broad statement, but that would be our goal.”

The university will likely turn back the clock on the stadium, giving it a 1930s look by incorporating a Fort Worth art deco style of architecture, Bailey said.

“We want to be the Camden Yards of college football,” Bailey said. “Camden Yards is where the Baltimore Orioles play. It is a new facility that’s been made to look old.”

The arches of the original design still stand on the west side of the stadium but have been less noticeable since the upper deck was added in 1956.

The South End Zone Complex features the art deco look with fresco designs at the top of the structure and around windows. The Texas & Pacific Railway Terminal in downtown Fort Worth is another example of the style.

The stadium’s new look will include more of the TCU gold brick, which is largely absent from the stadium outside of the South End Zone Complex. The amount of brick that will be used is unclear now in the early stages, Bailey said.

Another new feature that may be in the works is the addition of a concourse all the way around the stadium from which the fans could view the game. Another deck of seats may be above the concourse.

“I think if there’s any decrease, or much, it will be more of a byproduct of architecture than it will trying to cut the number of seats,” Bailey said. “We think there’s something special about 40,000 seats and not being below a 40,000 threshold. We also have direction from the chancellor’s committee for the stadium that we have the ability to expand for the future, and that we engineer for that now.”

Even though the renovations will add 20 suites and 800 club seats, which Bailey said is a liquid number right now, the general fan will not be forgotten. To keep everybody more comfortable, the size of seats will likely be in the 20-inch range while most stadiums use 16- to 18-inch seats, Bailey said. Regardless of whether the university chooses to install seats or benches, Bailey said he wants them all to have backs.

“This thing isn’t just a whole section of suites and club seats,” Bailey said. “It’s not just a glass condo sitting there, and we’re not going to have any real people out in the stands. We’re very much trying to take care of them as well.”

Concourses below the seats will receive a significant facelift as well, further improving the experience of the general fan.

The construction will likely be done one side at a time. The construction on one side will begin in January 2010, and the other side the following January. Bailey said the stadium cannot be out of commission during the season.

It’s still up for debate as to which side will close first.

“The practical people, the construction people, would say start on the east side because, with the east side, you can learn from your mistakes,” Bailey said. “The east side is the simpler side. Build it to begin with. The finance folks say you can’t throw the west side because that’s where your revenue is coming from.”

Bailey said he thinks the west side will get the nod.

More money is needed before the university can begin pursuing the necessary permits for the project, Bailey said. Designs would need to be finalized as well. Bailey said that if he received the money today, construction still wouldn’t begin until January 2010.

“There’s a lot of planning and a lot of leg work yet to be done,” Bailey said.