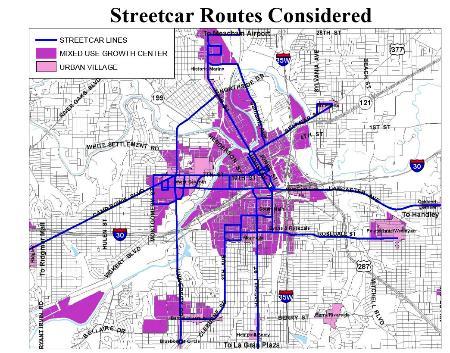 Streetcars could be making a comeback in Fort Worth, and routes along University Drive and Berry Street are a definite possibility, a city official said.

“It’s an obvious destination,” said David Gaspers, the city’s urban design planner. “Not only for students but for sporting events and cultural activities.”

The Fort Worth streetcar system began in the 1870s, Gaspers said. Mule-drawn streetcars were eventually upgraded to electric ones and by the late 1930s, with the invention of the automobile, ridership decreased and expenses increased, causing the system to die out, he said.

The city’s Modern Streetcar Study Committee, formed last year, decided a streetcar system would once again be feasible in Fort Worth, Gaspers said. The committee has identified potential routes downtown and streetcar lines that would connect major destinations to the downtown area. He hopes to meet with the City Council in December to present recommendations, Gaspers said.

If the City Council approves the project, a streetcar system could be in place by 2013, Gaspers said.

He said the modern streetcars considered for the project would be electric or ride on rails with an overhead wire and be incorporated with the regular flow of traffic.

Advancements in construction have minimized the amount of roadway disruption that would be caused by the project, and an estimation of one block of rail could be constructed in one week, Gaspers said.

An estimated cost for the project would be about $20 million per track mile, which is based on the studies of other systems around the U.S., Gaspers said.

Dana Burghdoff, deputy director of planning and development, said the city has not decided how many miles of track the starter corridor will have. She said other cities have been able to start off with anywhere from three to eight miles of track.

The committee is also looking at having property owners along streetcar routes help pay for the system, getting an approved bond package or using gas well revenue, Burghdoff said.

“The streetcar system is expensive enough that you would have to have a combination,” Burghdoff said.

“So it’s kind of like a what comes first – the chicken or the egg scenario,” Gaspers said.

In early October, the committee, Mayor Mike Moncrief, members of the City Council and other interested local leaders visited Seattle, Tacoma, Wash., and Portland, Ore., cities that have modern streetcar systems already in place, Gaspers said. Since the development of the streetcar line, he said Portland has seen over $3 billion of development occur along their system.

“That’s a big reason why the streetcars are being considered,” Gaspers said.

Alan Halter, a junior geography major, said his geography class is working on a project to find the best places in Fort Worth to put a potential streetcar system. Halter said the group has been attending committee meetings, researching cities where a modern streetcar system is in place and using the city’s urban planning material to make its decision.

Halter said the main purpose for the streetcar is not for transportation but rather for economic development. Areas of mixed-use development and vacant land are prime spots for a streetcar system to be implemented and would attract business, he said.

Halter said he supports the idea of bringing a streetcar system back to Fort Worth.

The city has not determined who would be operating the project, but the Fort Worth Transportation Authority, or the T, has been involved with the process and will be a likely operator for the streetcar system, Gaspers said.

Joan Hunter, a spokeswoman for the T, said it would be logical for the T to operate the streetcar system because it operates all other public transportation in Fort Worth.

“We certainly would be interested in providing that service,” Hunter said.

The T is also a member of the Modern Streetcar Study Committee, represented by board member Robert Parmelee, and supports bringing a streetcar system back to Fort Worth.