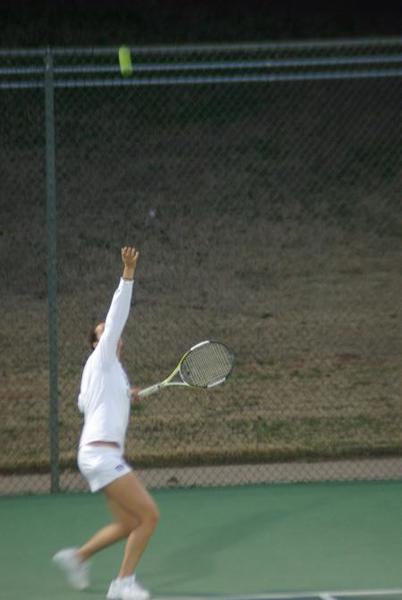 The cold weather did nothing to stymie the women’s tennis team as it cruised past crosstown rival SMU Wednesday, 6-1.

With wind chills dropping temperatures falling into the mid 40’s, the No. 31 Horned Frogs won their first six matches on the evening in straight sets, with the team’s only loss coming in the final match of the evening when SMU’s No. 62 Pavi Francis defeated TCU’s Macall Harkins, 7-6, 6-4, 12-10.

“She played a very quick player,” head coach Jeffrey Hammond said. “It was a good matchup in terms of their having a counter-puncher and playing a net-rusher.”

“It was a good win for me. I needed to win a match, and hopefully it will continue,” she said.

“It’s always a tough opponent since they’re crosstown rivals,” Hammond said. “It’s never easy, so we always come out expecting a fight, and sure enough, we had another one tonight.”

TCU (4-2) has won its last four against the Mustangs, conceding just two matches total to SMU during that span.

Harkins and Mountain West Player of the Week Anna Sydorska, the No. 11-ranked doubles team in the nation, defeated Francis and partner Bubien 8-7. TCU’s No. 2 doubles team, Munch-Soegaard and freshman Katariina Tuohimaa, handed an 8-3 defeat to the No. 38 doubles team of sophomore Nicole Briceno and junior Kseniia Tokarieva, the reigning Conference USA Player of the Week.

The Mustangs will return home to play host to Texas Tech on Friday at noon. The Frogs will host the Red Raiders the following day at noon at the Tut Bartzen Varsity Courts.