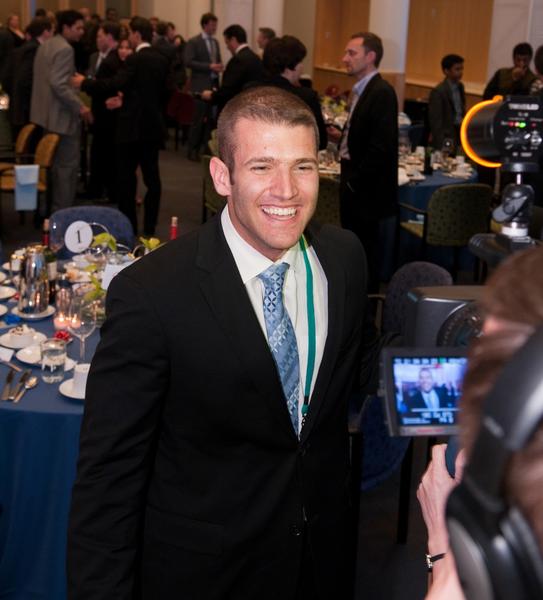 The university has added another student to its list of internationally recognized student entrepreneurs.

Brent Skoda, a senior general studies major, won $150,000 in cash and in-kind business services when he was named the Global Student Entrepreneur of the Year award at the global finals held November 17-19 in Kansas City, Mo.

The competition was composed of 30 student entrepreneurs from across the globe. It was judged by panels of more than 40 national media, top business leaders and Entrepreneurial Organization member CEOs from companies such as Century21 Real Estate and Molina Fine Jewelers, program manager of the Global Student Entrepreneur Awards, Greg Hill wrote in an e-mail.

Skoda qualified for the competition when he won the Southwest Regional Champion title last fall.

Participants in the finals were also able to attend workshops on presentation training, public relations and marketing. Students had the opportunity to network with peers, business leaders and Kauffman Foundation leaders. The Global Student Entrepreneur Awards were given by the Entrepreneurs Organization and hosted by the Ewing Marion Kauffman Foundation.

Skoda’s business, Collegefitness.com, is expected to generate revenue in the mid-seven figures this year, he wrote. Profit from the business comes from licensing nutritional data and video workout training programs to universities and publishers, he wrote.

According to an article in infozine.com, the business is worth about $2.4 million and has partnerships with Google and the University of Oklahoma.

These businesses provided learning experiences and helped Skoda build up to his current endeavor, College Fitness.

Skoda now plans to pursue the First Lady’s Office to make his restaurant menu data readily available to all Americans.

By winning the award, Skoda joined university alumnus Adam Blake, who won the competition in 2005. Blake was also there to see Skoda win the award, serving as one of the 33 judges in the final round of competition, Hill wrote.

Brad Hancock, director of the Neeley Entrepreneur Center, said he saw parallels in the two winners in their commitment to their business concepts and overall perseverance.

“The two guys are completely different about their business concept, but they’re so passionate about what it is,” he said.

He added that it was amazing that TCU had two of the winners in the last six years.

“It’s almost like how we’re not a BCS conference but we keep knocking down the door and we’re doing that with our entrepreneurship program as well,” he said.

David Minor, Founder Emeritus of the Neeley Entrepreneurship Center, worked with Skoda in an independent study. He attributed Skoda’s success in the competition and as an entrepreneur to his presentation skills and charisma.

“Brent is a great presenter, he’s got lots of charisma and he’s a great salesperson,” he said.

Minor added that Skoda also sold the judges on another key factor in the competition: the sustainability of the business, which is often difficult for college startups.

Skoda will also receive access to the Global Entrepreneurs’ Organization Network. The network is comprised of 7,500 business owners from 38 countries.

Skoda wrote that access to the global Entrepreneur’s Organization network was invaluable.

“Just days after the awards, I was invited by the U.S. State Department along with EO to be a keynote speaker in front of 250 influential politicians and entrepreneurs from across the Middle East. I was asked to speak about what can be done to help drive youth entrepreneurship domestically and abroad,” he wrote in an e-mail.

After his appearance in the Middle East, Skoda will travel to Algeria and then return to the university to finish exams, he wrote.

Skoda was in the Middle East as a keynote speaker at a conference at the time of publication, but wrote that he couldn’t have been more grateful for the opportunity to participate in the competition.