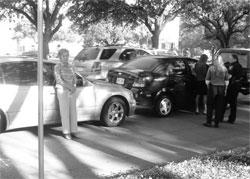 A TCU student was taken to Harris Methodist Fort Worth Hospital due to injuries suffered during a five-car accident Wednesday afternoon, Fort Worth Police said.The accident occurred at the South University Drive pedestrian crossing adjacent to Sadler Hall at about 6 p.m. An ambulance took the driver of a white Ford Mustang to the hospital on a stretcher with a neck brace.

Fort Worth Police Officer Rachel Cox said the accident occurred when the driver of the Mustang accelerated, ran a red light and rear-ended another vehicle, which then caused four vehicles to get rear-ended.”

Erica Hashman, a Fort Worth resident, said she was on the way to pick up her children from a local school when the accident occurred.

“When I was going through, the light was turning orange, so I guess she tried to speed up to get through it,” said Hashman.

Tim Sanders, a TCU construction services employee, said he was driving the last vehicle involved in the accident but added he was glad nobody got injured.