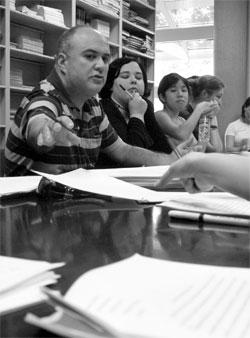 Radio-TV-film students are following their “Passions” this semester. “The Young and the Restless” students have learned they have but “One Life to Live,” and have come together working at to “The Edge of Night”, with six TCU faculty to write, direct, produce and design their very own soap opera.Over the course of the year, under the guidance of the faculty members, students will produce 10 episodes that will begin airing on Tager-TV Channel 40 starting around spring break, professor Richard Allen said.

Junior RTVF major Rachel Curtis is in the dramatic writing class that is developing the script for the soap opera, and said she liked how the course simulated the real world.

“It’s a good experience for all of us because we all are in the conference room sharing our ideas as if we were the writers, and (Allen) is the head writer,” she said.

Senior RTVF major John Michael Powell said it gets stressful when 20 students are in the room trying to get their ideas into the final product.

“But I think we have a good unit right now,” he said, referring to the way the team works together.

Another group of students is involved this semester to provide a “Guiding Light” to the soap opera. The lighting and design class, taught by instructor Greg Mansur, will design the sets and light the show.

Class members will take field trips to look at what they can use to make the sets, he said.

Mansur said students must get into the minds of the characters living in spaces and try to make their spaces relate to them in color and design.

“Like detectives, our students will go to the scene of the crime and look at the details,” he said.

And what about the students who aren’t RTVF students?

Auditions for a 14-person cast will be held in mid-October, Allen said.

Allen will be casting the show, and anyone from any major may try out, Curtis said.

Other TCU productions under Allen since 1995 include a sitcom and three other soap operas.

Allen said many outside professors are impressed by TCU’s production of a soap opera every few years.

“We are able to make the connection between all the different parts of the production and how it comes together,” he said.

RTVF students said they would use what they learn in this production in “Another World” – after college.

Curtis said she doesn’t want to work in soap operas, but said she would benefit from what she’s learning being part of a team in a demanding environment.

Junior RTVF major Andrea Vasilo said she grew up watching soap operas and would consider starting a career in the medium.

“I’m able to be cheesy and get away with it,” she said.