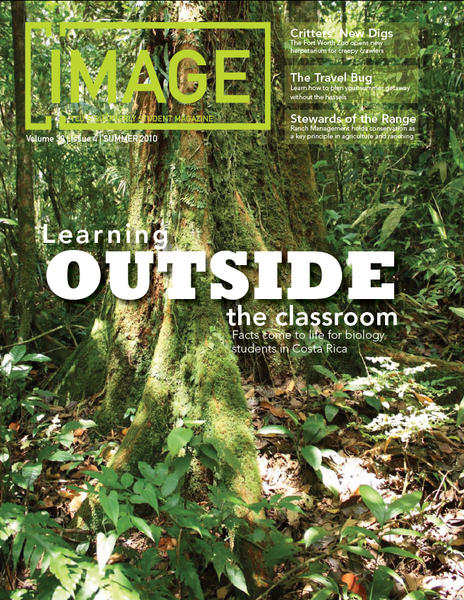 Image magazine was recently recognized for its excellence in design from a board of national publication advisers.

The university’s quarterly magazine was given awards in the categories of cover and headline presentation in the 18th edition of the Best of Design Awards contest by College Media Advisers, Inc.

The magazine earned the first place award in the cover category for an issue that featured a story titled “Learning outside the classroom.” Former Image editor-in-chief and university alumna Lauren Rausch designed the cover. According to collegemedia.org, the College Media Advisers website, Rausch’s use of type was the strong point on the cover.

“Great command of type 8212; the type not only works, but there is enough of it to really have the chance to pull me in,” according to written comments from a judge on the website.

The magazine also placed third in the headline presentation category for a story on The Fort Worth Zoo. Former Image design editor and university alumna Katelyn English designed the layout for the story. English’s headline read, “where the CREEPY things are” and featured different reptiles crawling through the enlarged word, “creepy.”

According to a comment on her design, a judge wrote, “Lots of fun. A perfect use of headline hierarchy really brings the word “creepy’ to the forefront.”

To see the complete list of awards, go to collegemedia.org/bocd18winners